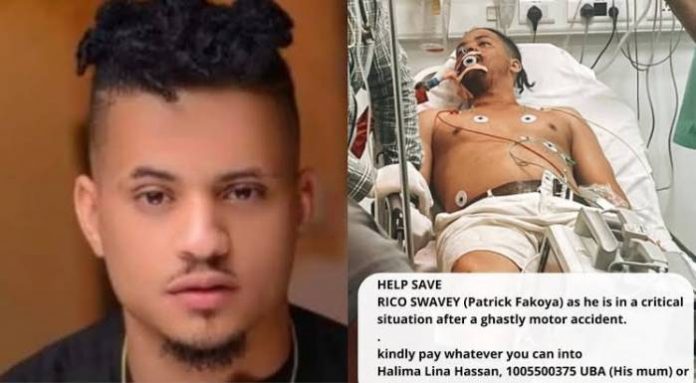 His demise was confirmed by his close friends, Alex Asogwa and Tobi Bakri on Thursday.

The Next Edition learnt that Rico Swavey was involved in a motor accident and went into coma shortly.

In separate tweets,  both Alex and Tobi confirmed the death. “This is not what we agreed Rico. Rest In Peace,” Alex tweeted. While Tobi shared a picture of him, adding, “This is how I will remember you. RIP.”

The duo had announced on Wednesday that he was on life support after a ghastly motor accident and appealed to the general public to donate to save his life.

Rico Swavey’s management also announced on Wednesday that he was on life support in the hospital and posted a video of the crashed car and asked for prayers and support from his fans, via his Twitter handle.

May his soul Rest In Peace!