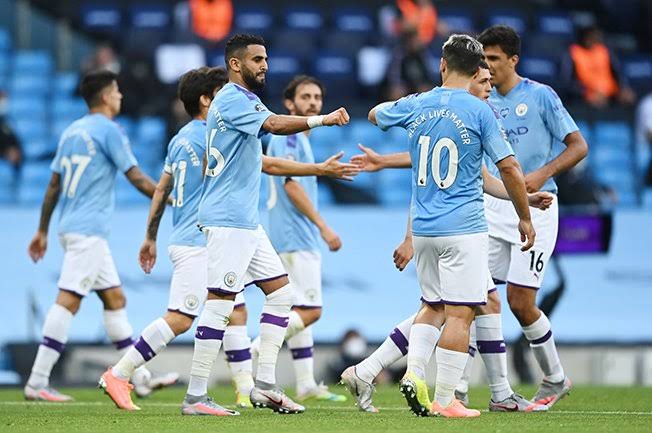 Manchester City’s Phil Foden and Riyad Mahrez scored two goals apiece as the hosts crushed a woeful Burnley 5-0 in the English Premier League (EPL) at The Etihad stadium on Monday.

Manchester City showed their impressive strength in depth, making eight changes but were still too strong for the visitors.

Burnley manager Sean Dyche could only name seven of the allowed nine substitutes, two of them goalkeepers, with his inexperienced bench without four regulars who have not signed contract extensions and it was a long night for the Clarets.

Phil Foden opened the scoring in the 22nd minute, drilling a low shot past keeper Nick Pope after a short-corner routine.

Riyad Mahrez made it 2-0 with a superb finish, collecting a long pass from Fernandinho and then jinking past the Burnley defence before firing home.

City made it 3-0 just before the break when a VAR review ruled that Burnley’s Ben Mee had fouled Sergio Aguero inside the box and, while the Argentine striker went off injured, Mahrez converted from the spot.

Burnley’s defending was then sloppy at a corner again, with Foden left free to cleverly pick out Bernardo Silva who put a ball across the face of goal for David Silva to slide home six minutes into the second half.

The outstanding Foden made it 5-0 in the 63rd minute, finishing off a sweeping counter-attack. (Reuters/NAN)