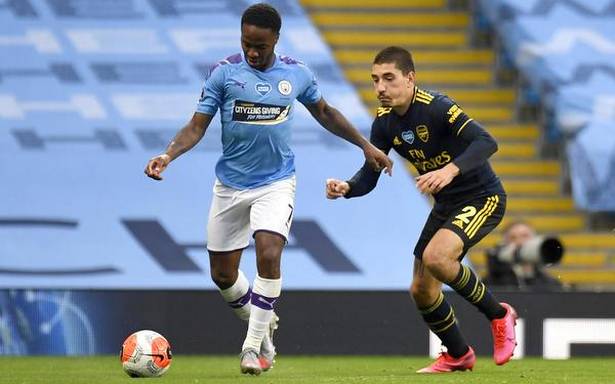 Raheem Sterling scored the first goal of the Premier League’s return to action after the Coronavirus lockdown as Manchester City defeated Arsenal 3-0 behind closed doors at the Etihad stadium on Wednesday.

The result means Liverpool, whose lead has been cut to 22 points by second-placed City, cannot now win the title on Sunday at Everton in the Merseyside derby.

But the league table was far from the minds of the few people inside the stadium at kickoff time.

A minute’s silence was observed for victims of the Coronavirus followed by the players and officials taking a knee in support of the “Black Lives Matter” movement.

Sterling, a prominent supporter of the movement whose slogan featured on the players’ shirts, fired home on the stroke of halftime to put the hosts ahead.

City had threatened on several occasions to provide the first goal of “Project Restart” with Arsenal keeper Bernd Leno saving efforts from Sterling and David Silva and racing out to foil Riyad Mahrez.

The goal came after Arsenal substitute David Luiz failed to deal with a ball into the box and allowed Sterling in on goal, and the Brazilian was at fault again for City’s second.

Mahrez got the wrong side of Luiz as he burst into the box and the ex-Chelsea defender put his hand on the Algerian’s back.

Referee Anthony Taylor ruled he had pushed him to the ground, awarding a penalty and sending off Luiz.

Kevin De Bruyne confidently converted the spot-kick and City never looked in any danger against opponents reduced to 10 men.

City also ended the game with 10 players when Spanish defender Eric Garcia was carried off on a stretcher after a collision with his keeper Ederson.

City were not able to replace him as manager Pep Guardiola had used all five available substitutes.

Guardiola’s side wrapped up the win in stoppage time when Sergio Aguero hit the post, after a neat exchange with Sterling, and substitute Phil Foden slotted home the loose ball.