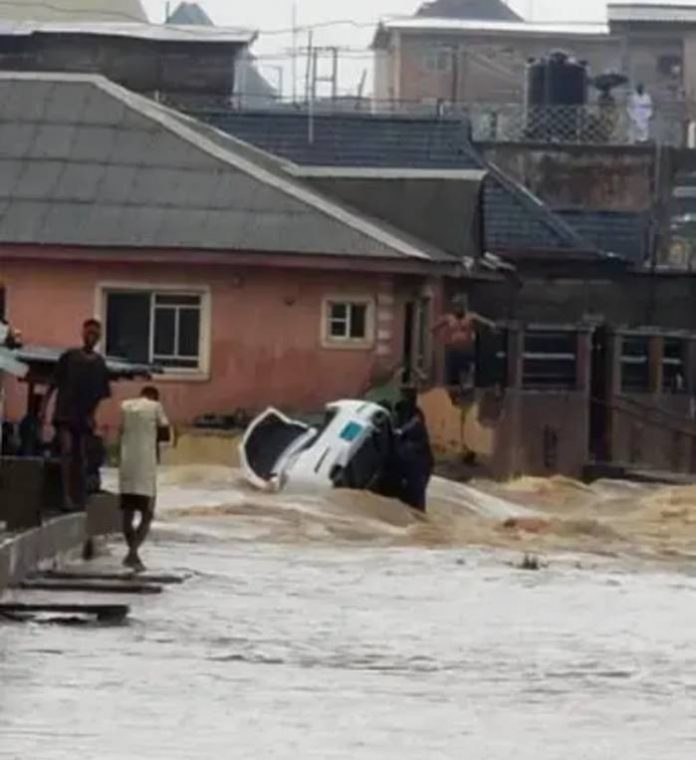 A major flood outbreak in Lagos has wreaked havoc on residents of Orile-Agege, sweeping away moving vehicles with their occupants.

The occupants – three in each of the vehicles – were driving along Fatoki street, Agege, when the flood swept them into a drainage.

Two residents of Orile-Agege have also been declared missing, while four were rescued in the incident.

In another development, no fewer than 16 passengers onboard a commercial boat heading to Ibeshe from Mile 2 are presently missing.

The incident occurred along the Kirikiri water channel around 7.45pm on Friday but the news broke on Saturday morning.

Operators of the boat was said to have violated the safety rules by operating beyond the approved time for commercial boats in Lagos.

A statement by the Lagos Area Manager of the National Inland Waterways Authority (NIWA)z Eng Sarat Braimah, revealed that, 16 passengers were onboard the ill-fated boat as at the time of the accident.

“At about 7.45 today the 8th of July 2022, The National Inland Waterways Authority and Lagos State waterways authority received a distress call of an incident on the waterways.

“A W19 passenger Fibre boat carrying 16 people capsized along the Ojo area of the state.

“The Boat going from Mile 2 to Ibeshe in Ojo axis broke the waterways rules of late travelling by setting sail at 7.45pm.As he set out, the tide of the water drifted the boat to a stationary barge which caused the boat to overturn.

“It is said that all passengers on board which includes children were not all putting on their life jackets.

“The Search and Rescue team of the Lagos State Waterways Authority (LASWA), National Inland Waterways (NIWA) were immediately mobilized to the scene of the incident but unfortunately could only find the boat after several hours while efforts are still ongoing to locate the victims.

“The Boat is currently in the custody of Marine Police. The Boat Captain is also unaccounted for as at the time of this press release” she stated.

The accident occurred barely three days after a similar incident in Lagos.

Two ladies, out 20 persons, died in a boat mishap at Ipakodo area of Lagos on Wednesday. (Daily Trust)