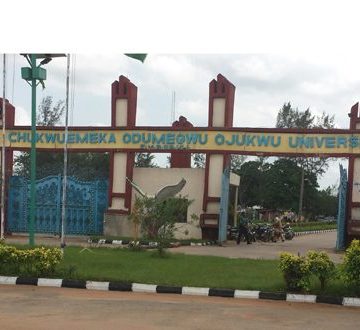 Some female graduates of the Chukwuemeka Odumegwu University, Anambra State, have threatened to expose randy lecturers of the institution even as they called on the Vice Chancellor to take steps to curb the practice.

According to the students, five lecturers had sexually harassed several female students of the university while some who would not succumb to their sexual advances were victimised.

They maintained that one of such lecturers allegedly turned his office into a hotel room, where he would sleep with female students.

READ ALSO: Anambra: Why Doctors are on Warning Strike — MDCAN

Their statement titled, ‘Sex for Grades in Ojukwu University: A Scandal of Gigantic Proportions,” described the act as shameful.

They urged the institution’s Vice-Chancellor, Prof. Greg Nwakoby, to do the needful to save the female students from the scourge.

The statement read in part, “This shameful act is happening in departments including English, Political Science, Mass Communication, Banking and Finance, Micro-Biology and Philosophy.

“We recommend that close-circuit television cameras be mounted in and around staff offices in the institution.”
When contacted, the vice-Chancellor, said he had set up a committee to investigate the allegation.