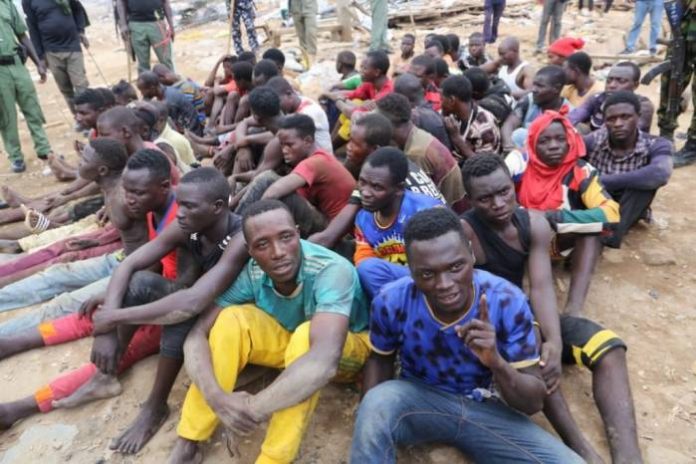 The Federal Capital Territory Administration (FCTA), through the Ministerial Taskforce on City Sanitation, on Thursday in Abuja raided criminal hideouts in Gwarinpa Estate and arrested 49 suspects.

Chairman of the taskforce, Mr. Ikharo Attah, who led the operation, explained that the 49 suspected criminal stopped passersby and dispossessed them of their belongings after the joint team had finished it operation.

“Most of the criminals took advantage of the cleanup exercise and went on looting spree, dispossessing passerby of their belongings.

“This shows why we are demolishing Illegal structures. There are illegal structures, shanties and fences almost everywhere in Gwarimpa Estate. These are criminal hideouts which we will not allow to stay.”

Attah, who lamented the increasing rate of shanties in the FCT, vowed that the FCT Administration under the Minister, Malam Muhammad Bello, would not allow illegality to become the order of the day.

He condemned the act of post-demolition looting and assault on innocent residents.

One of the victims, Mohammed Awwal, an Immigration officer who spoke on behalf of others, said “They forcefully collected his mobile phone and food stuff with cash in the vehicle hile I was driving to pass through this place. I have identified one among those arrested.”

The 49 suspects who have turned the demolition exercise into looting spree have been taken to Efab Police Station, Galadimawa, under Gwarinpa Estate for more interrogation and prosecution. (NAN)