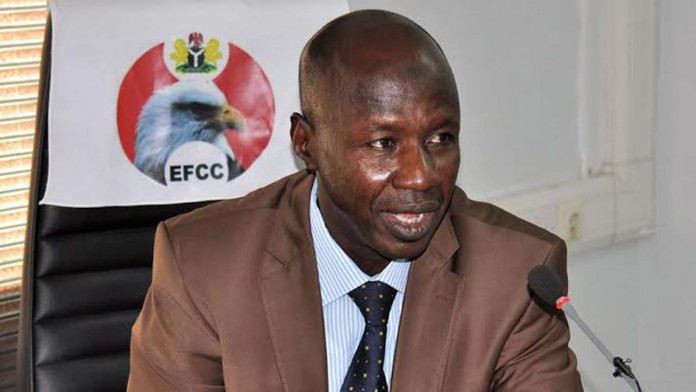 The Economic and Financial Crimes Commission, EFCC, has pledged to fish out some of the Nigerians named in US fraud schemes, who are said to have returned to the country.

Acting Chairman of the Commission Mr. Ibrahim Magu made the pledge when he received the Chairman/Chief Executive Officer of the Nigerian Diaspora Commission, Mrs. Abike Dabiri-Erewa, NIDCOM, in his office.

Recall that 77 Nigerians were indicted by the United States for fraud running into millions of naira as a 252-count federal grand jury was unsealed on Thursday, August 22.

The Nigerians were accused of laundering funds through a Los Angeles-based money laundering network.

Speaking on Friday, however, Magu noted the possibility of the number of Nigerian suspects being more than 77 going by the joint operation of the EFCC and the FBI in the past few months.

He said that the commission had begun a joint operation with the United State Federal Bureau of Investigation to clamp down on internet fraudsters.

According to him, a total of 16 cyber crime suspects, Yahoo Boys, have been arrested in Abuja since the joint operation codenamed Operation Wire Wire was launched.

Assuring that the EFCC was on the watch-out and would not leave any stone unturned, he also stressed that there would be no hiding place for anyone no matter how highly placed.

He described the indictment of 77 Nigerians as very sad and unfortunate, lamenting the return of the Era of 419.
“It is very sad. It’s like the era of these 419ners and Yahoo Boys is coming back.

“I remember we worked with the FBI in Lagos and others. We carried out Operation Wire Wire. We are re-energising; we will go out and storm all their hideouts. Most of them have relocated to Ghana because the heat is on them.”

The EFCC Chairman pleaded with the to help inform and educate Nigerians on the negative impact of internet fraud or 419 saying “some people don’t still believe that the activities of these Yahoo Yahoo Boys are still wrong. We have a situation where we have Mothers of Yahoo Yahoo Association.

“Whenever we arrest their children, they’ll gather around our offices pleading for the release of their children. So I want you to help us sensitize Nigerians so that people will frown at the menace of419.”

On her part, Mrs. Abike Dabiri-Erewa said the situation was embarrassing.

She said Nigeria was not a country of 419 people.

“So Mr. Chairman, we just want you to reassure the world that we are not a nation of 419ners because we have an EFCC that is doing everything possible to put a stop to the menace.”
“The Commission will be working with the EFCC to have a special desk to tackle cases like this whether it is about fraud or any other related issues,” she stressed.