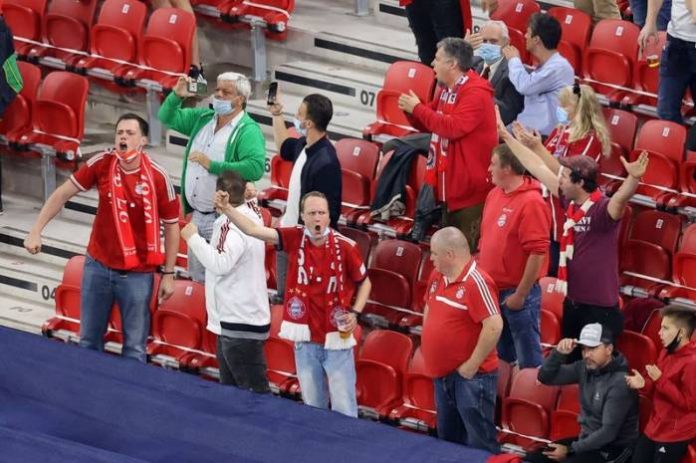 The European Super Cup game between Bayern Munich and Sevilla in Budapest passed off smoothly on Thursday.
European football governing body UEFA had used it as a trial run to see if the world’s most popular sport can be played in front of live audiences once again.

Fans began to arrive hours before the match, the first major European club competition game to allow them since football returned amid the COVID-19 pandemic.

Sixty minutes before kick-off, the crowds at the Puskas Stadium were building.

Once inside the Hungarian capital’s large new arena, however, the 15,500 spectators spread out in the 67,000-seat stadium.

Encouraged to do so by signs and security staff, they milled around the grassy grounds, standing or strolling about well apart from each other with everyone wearing face masks.

The coronavirus pandemic stopped fans going to stadiums, although club football in many countries has now resumed and some have allowed a limited number of spectators in to watch games.

UEFA had decided its traditional season-opening Super Cup game, between the Champions League winners and Europa League champions, would be safe to attend.

But the ruling body faced criticism.

The fans who did get in were focusing on the positives.

“I can’t tell you how long I have waited to do something like this, it’s like I’m having withdrawal symptoms, but now I’m getting a fix and there is nothing to stop me,” said 24-year-old Bayern Munich supporter Matyas Lakatos.

A friend came over to hug him but Lakatos pushed him away.

The Hungarian government and Prime Minister Viktor Orban declined to comment on the match’s health risks.

But experts, opposition politicians and local people have expressed frustration at being subjected to such an experiment.

UEFA President Aleksander Ceferin described the match as a “pilot project” and reiterated that his organisation would use the experience to decide what to do about future games.

At the start of the match, social distancing was observed fairly well —— unlike in Hungarian domestic league games during which it has not been enforced.

READ ALSO: PUTTING OUR MONEY WHERE OUR MOUTH IS

After the first goal, a penalty kick by Sevilla winger Lucas Ocampos, even hardcore fans in a corner section stayed well apart.

But four Spanish reporters in the stands came together for a quick bear hug.

The equaliser by Bayern Munich midfielder Leon Goretzka showed that most people in the arena were overwhelmingly fans of the Bavarian club.

But they remained safely spread out as they celebrated loudly.

They also showed restraint when midfielder Javi Martinez put Bayern Munich ahead in the first period of extra time and the German champions hung on to secure a 2-1 win.

The teams of people manning the bars were recruited in groups who already knew each other to limit random meetings.

Alex, a 20-year-old student, said he had received detailed training in how to observe distancing rules.

“I’m not worried,” Alex said. “I make sure to always wash my hands, stay apart, but I have to make ends meet so I need the work. It is what it is. You can survive anything if you want to.”