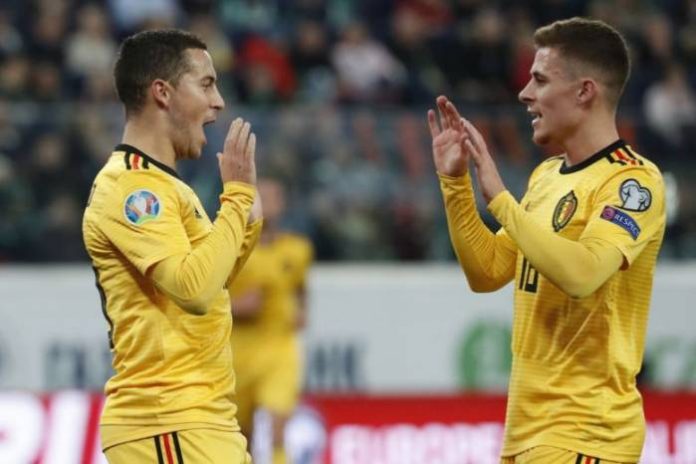 Belgium secured top spot in Euro 2020 qualifying Group I and stretched their perfect record to nine wins after a sparkling 4-1 win in Russia on Saturday.

Two goals from Eden Hazard and one by his brother Thorgan inspired them to victory against home side Russia.

With one round of games remaining, Belgium have a maximum 27 points and second-placed Russia 21, both sides having booked their places at next year’s 24-nation tournament.

Although there was only pride to play for, the game got off to a pacy start and Thorgan Hazard fired the visitors ahead with a superb 19th minute goal.

Eden Hazard made it 2-0 in the 33rd with another fine effort, volleying a low drive past Russia’s Brazilian-born goalkeeper Guilherme after striker Romelu Lukaku headed a lofted pass into his captain’s stride.

The livewire forward doubled his tally shortly before halftime from a brilliant move, with midfielder Kevin De Bruyne squaring the ball unselfishly for Hazard to stroke into an empty net from 12 metres.

Only poor finishing by Lukaku and two good saves by Guilherme denied the Belgians a bigger lead in the opening hour as Russia failed to create anything in front of a partisan home crowd.

Ruthless Belgium struck again in the 72nd minute as Lukaku made amends for his early miss, rifling a scorcher inside the near post from 16 metres with Guilherme clutching nothing but thin air.

Georgi Dzhikiya finally gave the subdued home fans something to cheer about when he swept home a close-range rebound in the 79th.

It was however scant consolation for a crushing defeat by last year’s World Cup semi-finalists.