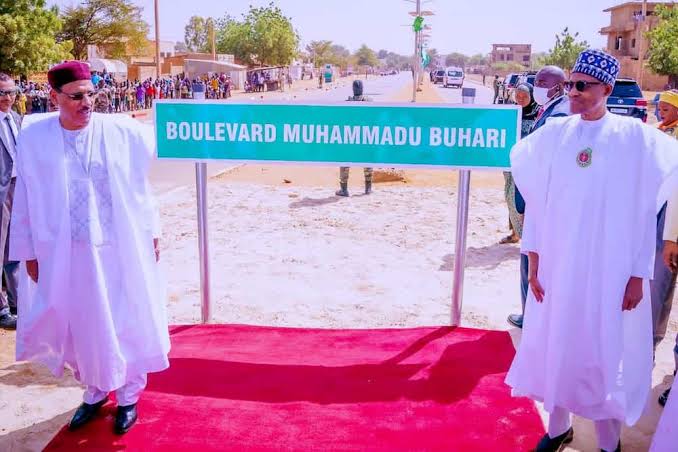 Presidency on Thursday said the naming of a road after President Muhammadu Buhari in Niger Republic was an indication of the tremendous respect which Nigeria’s neighbours have towards him.

Senior Special Assistant on media and Publicity to the President, Malam Garba Shehu disclosed this in the Nigerien capital, Niamey, shortly after Buhari inaugurated a major road named after him.

Shehu said President of Niger Republic, Mohammed Bazoun, accompanied by the Mayor of Niamey and other officials, took Buhari on a tour of the 3.8 kilometer boulevard inaugurated in line with the country’s constitutional provisions.

The presidential aide quoted Buhari as expressing satisfaction with the existing bilateral relationship between Nigeria and its neigbours.

Buhari expressed the belief that such ties had helped tremendously, especially in the areas of tackling border insecurity, illegal arms import, and smuggling.

Shehu said Buhari had on assumption of office in 2015, opened up strong dialogue with neighbouring Niger, Benin, Chad, and Cameroon, an approach, which had resulted in positive diplomatic ties of mutual interest to both countries.

”President Buhari has strong respect for our neigbours, and he understands the essence of good neigbourliness.

”Before this administration, some of these countries complained that they were not even being talked to by Nigerian leadership. We have opened up dialogue with them and it is paying off.

”We are partnering with them on essential matters, especially on security, tackling smuggling, and importation of illegal weapons, so the partnership is complete,” Shehu added.

The presidential aide believed that  Bubari would be leaving behind on May 29, 2023, a solid relationship, built on a solid rock with Nigeria’s neighbours and expected to be built upon by his successor.

The Nigerian leader is in Niamey to join other leaders in the continent for the African Union (AU) summit on Industrialization and Economic Diversification. (NAN)