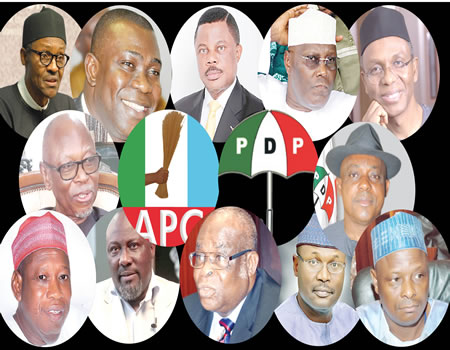 There were some issues that defined the political landscape in the last 12 months. In this report, our Political Correspondent, YUSUF MOHAMMED, takes a look at the key issues that made headlines in politics in 2017.

The year was not one of general elections, yet it had unforgettable political moments that have to be discussed when reviewing political activities of 2017. It was a year that the political scene was dominated by calls for restructuring or devolution of power. It also witnessed political intrigues and maneuvering by political parties and their chieftains.

One would easily remember how busy the presidential aircraft was. It was not busy due to official activities within the country, but for flying President Muhammadu Buhari in and out of Nigeria on medical vacation to London.

In January, the president travelled to London for treatment, details of which were not disclosed. The President spent over a 100 days with series of visits from officials from Nigeria. At some point on his return, he made a revelation about his health. “I couldn’t recall ever being so sick,” he confessed.

While the President was away, there were many political activities in Nigeria. The Vice President, Prof. Yemi Osinbajo, who became the acting President, made peace moves in the Niger-Delta region when agitations by militants from that region reached its peak. Bombing of pipe-lines almost paralyzed oil production and grounded the economy.

While that was going on, there was also an intense war between members of the national assembly and the executives. Acting Chairman of the Economic and Financial Crimes Commission (EFCC), Mr. Ibrahim Magu, was refused confirmation as the substantive Chairman by the Senate due security report.

The decision of the Senate elicited mixed views in the polity. Many reasons had been advanced by Nigerians to buttress the rejection; some believe the rejection was due to reasons other than the security report. Whatever the reasons may be Magu still remains unconfirmed.

In what seemed to be another form of embarrassment, there was a face-off between the Comptroller-General of Nigeria Customs Service and the Senate. Col. Hameed Ali, a retired Colonel, who had not been seen in Customs uniform since his appointment by President Buhari in 2015 was mandated to appear in it at the floor of the Senate to explain issues bordering on duty payment for imported vehicles.

Amid all that, the Senate President, Dr. Bukola Saraki, was forced to a regular visit to the Code of Conduct Tribunal to answer questions on issues related to acts of declaration.

Also, accusing fingers were also pointed at the executives on some corruption issues. The Secretary to the Government of the Federation, Babachir Lawal, and his grass cutting controversy, made headlines for weeks. It was alleged that N530 million was used to clear glasses by the SGF.

When the case was becoming an embarrassment to the Buhari administration, Mr. Lawal was suspended before he was finally sacked after a panel presided over by Vice President found him guilty. He was not alone. The National Intelligence Agency boss, Mr. Ayo Oke, was also sent packing after he was linked to huge amounts of cash found in Osborne towers, Ikoyi. It should be recalled that on April 12, a whistle blower alerted the EFCC that 44 million dollars, 27 million pounds and 23 million naira was found in a flat in Osborne Road, Ikoyi, Lagos.

After the main opposition party, Peoples Democratic Party (PDP), got a bloody nose in 2015 general elections, the party, while trying to re-build, experienced a lot of legal tussles. It came to an end when the Supreme Court sacked Senator Ali Modu Sherif and declared Senator Ahmed Markafi led caretaker committee as the legal one.

That decision strengthened the party for its national convention, which was held on December 9. Mr. Uche Secondus, emerged Chairman of the PDP. Secondus’ victory did not go down well with those who felt the chairmanship position was meant for the South West. The aggrieved people claimed the South-West was marginalization. In order to appease aggrieved members, the party set up a National Reconciliatory Committee led by Gov. Seriake Dickson of Bayelsa state.

The APC, on the other hand, had been in crises. Many party members claimed to be left out of running of the party. There were also issues of some key players in the party not being compensated for their roles in the 2015 general elections.

The internal affairs of the party were said to be poorly executed as the party had only one NEC meeting in over a year and no national convention in over two years as stipulated by its own constitution.

Also, APC held primaries in Lagos for Councillorship election on May 28, but were marred by violence. The aftermath was even more devastating as party chieftains were beaten up and disgraced.

Razak Bello was gunned down by unknown gunmen suspected to be his political rivals in the primary election. He was a leader of the National Union of Road Transport Workers (NURTW) and also the chairman of the Lagos State Motorcycles Owners Association of Lagos State.

In Osun State, there was a tragedy in the political scene as Senator Isiaka Adeleke who was aspiring to run for governor under the platform of the APC in 2018 lost his life. His seat was declared vacant and his brother, Senator Ademola Adeleke, resigned from the ruling APC to officially become the PDP candidate to replace him in the senate.

The state of Osun Governor, Rauf Aregbesola, in connivance with other stakeholders of the APC cleared Mudasiru Hussein to run unopposed for the Osun West senatorial district. As a result, Adeleke left the APC in annoyance to join the PDP. In the election, he defeated Mudasiru of the ruling party to replace his brother in the senate.

In Anambra State, despite calls by members of Indigenous People of Biafra (IPOB) for residents to boycott the governorship election, it held peacefully. Mr. Willie Obiano emerged governor of Anambra State in a landslide victory. He defeated his opponents in all local government areas.

In Kogi State, the loudest critic of Governor Yahaya Bello had been Senator Dino Melaye. Melaye who seemed to be perpetually in disagreement with Bello saw it as an opportunity to call for his resignation or impeachment when he learnt that the governor was alleged to have registered twice by INEC.

While Melaye was said to be strategizing with stakeholders on how to impeach the governor, Bello, on the other hand, was accused of sponsoring stakeholders from Melaye’s constituency to recall him.

Dino Melaye in order to prevent that from happening organized a protest at the entrance of Kogi State Polytechnic. According to investigations, unknown gunmen stormed the venue of the rally from Nataco junction, Lokoja, and shot sporadically at people. No fewer than five persons were felled by the bullets. One of those who got killed was Saka Seidu, a fresh graduate of the Polytechnic.

Perhaps one of the biggest political stories of the year was the defection of former Vice President, Alhaji Atiku Abubakar from the APC back to the PDP.

The signs were clear to all that Atiku would eventually leave the party. It was just a question of when. The former Vice president had complained openly that he was not being carried along in the scheme of things. When Buhari assumed office, he advised his administration to “break special interest cabals in the power and oil sectors to make significant economic progress.” Did they reckon with that?

2018 is likely to be even more interesting and exciting as it is the year before the general elections in 2019. Many events will unfold.