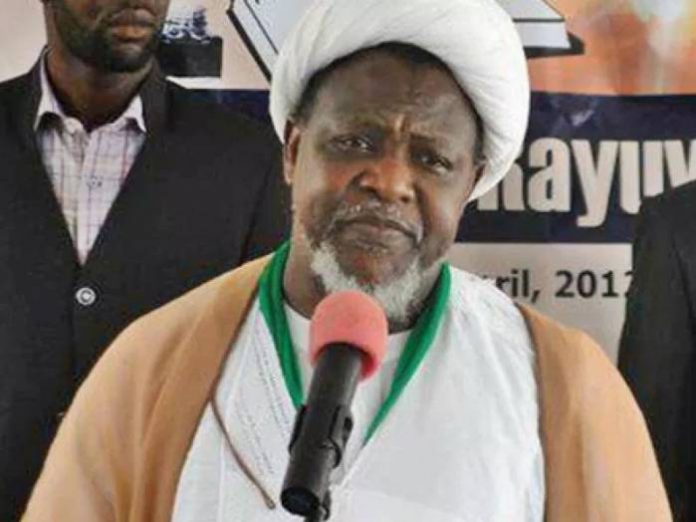 The Islamic Movement in Nigeria, IMN, on Sunday described the Federal Government’s recent claim that its leader Sheikh El-Zakzaky had tried to seek asylum in India before he was repatriated as part of a campaign of calumny by the government to cover its own gross misconduct in a foreign land.

It accused the Federal Ministry of Information of championing the campaign.

The group claimed that their leader returned from India without receiving treatment because the federal government “mischievously went beyond its role of supervision to the level of maliciously interfering in the medical process, instructing on which doctors the Sheikh and his wife must see, while refusing to allow them access to their own doctors.”
In a statement signed by the President, Media Forum of Islamic Movement In Nigeria, Ibrahim Musa, the Movement insisted that the actions of the federal government confirmed the allegation that it had wanted to kill their leader in the name of medical treatment.
Below is the full statement:
RE: The Repatriation Of IBRAHEEM ZAKZAKY From India – The Facts

“Sequel to the Nigerian government’s sinister operation that frustrated the treatment of the revered Sheikh Ibraheem Zakzaky (H) and his wife Malam Zeenat Ibrahim in India that led to the repatriation of the couple, the Nigerian government, in its effort to deceive the general public, has concocted contradictory statements and lies to color its acts of violating the order given by the Kaduna High court allowing the Sheikh to seek treatment in India, with the government only supervising.

“The facts are that the government mischievously went beyond its role of supervision to the level of maliciously interfering in the medical process, instructing on which doctors the Sheikh and his wife must see, while refusing to allow them access to their own doctors. Apparently, the government had a hidden mission, the details of which they had detailed specific doctors to execute. The Sheikh was forced to either accept their choice or return home within two hours.

“Being mindful of the government’s various previous plots to eliminate him since 2015, first through the barrels of the gun and much later through poisoning in detention while refusing him access to adequate medical care until the court’s intervention, the Sheikh sensed the government’s intention of inducing killer doctors to finish what they had earlier started, now through the back door. He therefore insisted on having the presence of the doctors that initially assessed him in Nigeria, who also worked in that hospital, failing which, he preferred to return to Nigeria.

“He refused to be subjected to any breach in the basic ethical principles guiding the medical treatment of people of respect for persons: protecting the autonomy of all people and treating them with courtesy and respect and allowing for informed consent, which the Nigerian government had contracted medical personnel in the Indian hospital to throw to the wind.

“Before efforts at resolving this impasse could be concluded, the Sheikh was brought back to Nigeria, since their evil schemes could not be executed. The government is now churning out contradictory explanations to blame the Sheikh for not allowing himself to be killed in the name of medical treatment. The Nigerian government is also blackmailing the Sheikh that he sought for asylum in India just to cover their own gross misconduct in a foreign land.

“The campaign of calumny has been championed by the Federal Ministry of Information, which sarcastically even said they were apologising to India for the Sheikh’s “unruly behaviour” rather than for their own obvious attempted assassination of somebody in another country!

“Isn’t it rather contradictory that someone allegedly seeking asylum would be unwilling to stay back irrespective of the circumstances but preferring instead to return to his home country. It is on record that it was the Sheikh who requested to be brought back home having been denied access to his doctors and rejecting the killer squad engaged to “treat” him instead.

“The government’s claim that Sheikh’s wife antagonized the Nigerian officials by accusing them of killing her three children is yet another spurious search for justification for its maltreatment of the couple. Isn’t it true that it is the government that killed her three sons when its army invaded their residence at night in December 2015? Wasn’t her husband dragged over the corpses of their murdered children having been shot himself and left swimming in his own pool of blood? Wasn’t she also shot and left lying lifeless in the process? Were they expecting a cheer from her for all these severe gross violation of their fundamental rights, even as judged by a competent federal court?

“It is rather very shameful and a slap in the face of Nigeria that the government which hitherto claimed it had no hand in the case, now has to resort to lies, calumny and blackmail against a couple whose alleged crimes has never ever been proved in any court of the land. All the allegations against this couple have always been merely spurious and unproven, and knowing that they could never prove in any court use the might of state power to intimidate and misinform the public.

“It is noteworthy to state that the government is yet to respond to the confessions by the Saudi Arabian Crown Prince that they sponsored the Zaria genocide and the subsequent continued detention of the Sheikh in Nigeria. This same fact was earlier alluded to by President Muhammadu Buhari during a state visit to Qatar. The world is watching all the persecution of the Islamic leader with keen interest. The government can never change the narrative.

“We wish to thank the general public for their continued understanding and show of support in all these. No amount of feeding the public with concocted half-truths, lies and campaigns of calumny would swerve the course of justice for all the victims of Zaria genocide and its aftermath.”
SIGNED BY
IBRAHIM MUSA
PRESIDENT MEDIA FORUM OF ISLAMIC MOVEMENT IN NIGERIA
SKYPE :Ibrahim.musa42
18/08/2019