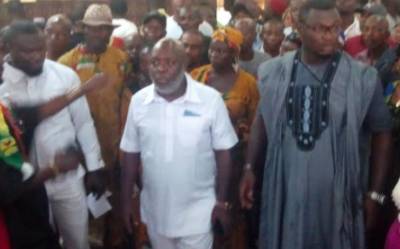 Mr. Edozie Njoku has emerged the National Chairman of the All Progressives Grand Alliance, APGA, and would pilot the affairs of the party for the next four years.

He was elected at the party’s convention held in Owerri on Friday and attended by delegates from the 36 states of the federation and Abuja.

Addressing party faithful after the election, Njoku promised to rebuild the party and restore unity among members.

He noted that the convention and his election resulted from the nullification of the outcome of the meeting of the National Executive Council, NEC, of the party held on April 14, in Awka, Anambra, by a court of competent jurisdiction.

He said: “I will take all necessary steps to reconcile all aggrieved members and rebuild our party.

“If we must support any politician, it will be a collective decision and not a one man show.

“All we want is for democracy to reign in our party. We should desist from unwarranted criticism and put heads together to rebuild APGA.

“We need to apologise to all those who were misled and short-changed before and during the last general elections because we are prepared to heal the wounds.

“APGA is our party. We collectively resolved and agreed that the post of the National Chairman must leave Anambra for another state.

“With a sincere spirit of team work, we shall rebuild our party. I must consistently keep on protecting the interest of APGA and nobody can push us out of this party,” he said.

Njoku, before his election as the National Chairman, served as the first National Vice Chairman, South, of the party.

He hails from Ibeku, in Aboh Mbaise Council Area of Imo.