The Oba of Benin, Oba Ewuare II, has congratulated Gov. Godwin Obaseki on his victory in Saturday’s Edo governorship election.

The monarch in a statement issued on his behalf by the Secretary of the Benin Traditional Council (BTC), Mr. Frank Irabor on Tuesday called on Edo sons and daughters as well as other residents in the state to support Gov. Obaseki in order for him to succeed.

The Oba particularly commended the National Peace Committee led by former military Head of State, Gen. Abdusalami Abubakar, for initiating the signing of the peace accord by the governorship candidates of the political parties.

According to the statement, “He also thanked all the candidates for adhering to the advice for a violent-free election given to them during the peace meeting in the Oba’s palace before the election which have been widely-acclaimed to have doused the tension that was building up before the election.”

Oba Ewuare II equally thanked the Independent National Electoral Commission (INEC), for the peaceful and successful election as well as the security agencies for a job well done.

The statement said further: “The palace of the Oba of Benin is grateful to all the security agencies for a job well done.The Omo N’Oba is grateful to the Almighty God and the Royal ancestors for granting our prayers from a peaceful election in Edo State.” 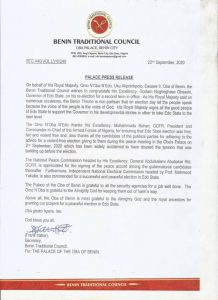 Gov. Godwin Obaseki of the Peoples Democratic Party (PDP) beat 13 other contenders to emerge winner of the election.

He beat his closest challenger, Mr. Osagie Ize-Iyamu of the All Progressives Congress (APC) with over 84,000 votes.