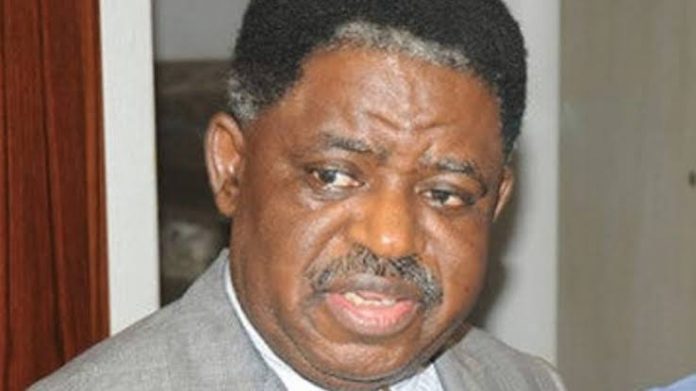 The Peoples Democratic Party (PDP) has dismissed reports that some of its key leaders in Ebonyi, including former Governor of the state, Sen. Sam Egwu and 23 other have been suspended from the party.

A statement issued by the party’s National Publicity Secretary, Mr.  Kola Ologbondiyan, in Abuja, on Sunday,  described the reports as misleading.

According to Ologbondiyan, no PDP leader in Ebonyi had been suspended.

He said the document purporting the suspension was fictitious and did not emanate from the Ebonyi state chapter of the party as suggested.

The statement noted: “For the avoidance of doubt the PDP does not have a state working committee in Ebonyi state as presented by the said fictitious document.

“As such, any such body said to have met to arrive at any decision or any action claimed to have been taken by such non-existent body is at best imaginary.”

The PDP spokesman said that the public was already aware that the body vested with the task of piloting the affairs of PDP in Ebonyi was the State Caretaker Committee.

He said that the committee had since assumed its mandate to the approval and delight of the leaders and members of PDP in Ebonyi since the dissolution of the party’s executives in the state.

“Moreover, a check on the records of our party in Ebonyi affirms that no such meeting as purported in the said document was held to take any such decision at any time.

“However, we have been made aware that the fabricated document emanated from a former leader of our party in Ebonyi who left on a personal voyage to another party.

“It is indeed pitiable that such individual will descend to the level of resorting to fabrications and calendar-doctoring in desperation for political redemption,” the statement added.

Ologbondiyan advised anyone behind such a publication to steer clear of PDP and face the challenges already confronting him in his new political family as well as the queries coming from the people of Ebonyi who have been betrayed by his action.