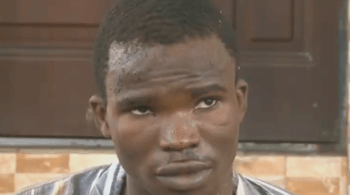 A Chief Magistrate Court in Port Harcourt on Tuesday remanded suspected serial killer, Ifeanyi Dike, in prison custody over the alleged murder of an eight-year-old girl.

The 23-year-old was said to have removed parts of her body for rituals.

George said that Dike committed the crime on August 8, 2017, at 8 Messiah Close in Eliozu, Port Harcourt.

The presiding Chief Magistrate, Andrew Amadi-Nna, directed that the case file be sent to the Director of Public Prosecution for advice and adjourned the matter indefinitely.

Dike, a second year Physics student of the University of Port Harcourt, was earlier arrested in Port Harcourt over his involvement in Chikamso’s murder but he escaped from detention a few days after his arrest.

He was declared wanted by the Nigeria Police.

His disappearance led to massive protest among residents of the little girl’s community and the arrest of an officer, Sergeant Johnbosco Okorinize, who reportedly aided his escape.

However, the Police re-arrested him in Barkin Ladi, Jos, from where he was returned to Port Harcourt for prosecution.