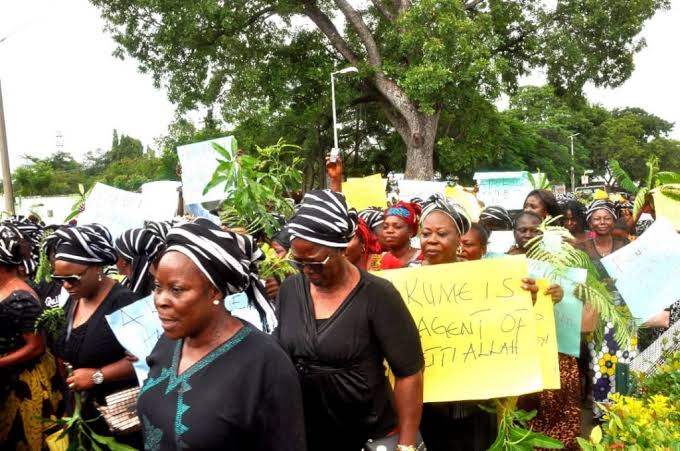 Benue Women under the aegis of Concerned Benue Mothers have protested what they described as “offensive and odious” press conference by the Minister of Special Duties and Intergovernmental Affairs, Senator George Akume.

The mothers who spoke through Mrs Rebecca Apezan, called on the Minister to make haste and tender an unreserved apology to Governor Samuel Ortom and other peace-loving people of Benue State.

This is just as Benue youth took to the street of Makurdi the state capital to protest the minister’s outing demanding also that he apologizes to the Benue people.

The concerned mothers said Senator Akume, as a former governor, should be in the forefront condemning the mindless shedding of blood by herdsmen and not seen to be promoting hate on Governor Ortom who is speaking truth.

The mothers said they were shocked that Senator Akume and his group closed their eyes against the pains visited on Benue people by killer herdsmen and rather took sides with a president who has not shown any form of concern since the attacks and killings.

They stated that it was too early in the day for any discerning Benue son or daughter to forget President Buhari’s counsel that “we should learn to live with our killer neighbours.”

They further expressed sadness and surprise that Senator Akume who benefited so much from Benue State would seek to destroy the state for his ‘selfish’ interest.

“We want Akume and his group to remember that human life is sacred, the lives of Benue people are precious and as mothers, we will rather die supporting our Governor than being beggars at the court of killers.”

The women called on President Muhammadu Buhari to show the same commitment to Benue as he is doing to Borno State, appealing that he release the N10 billion promised by the Federal Government in 2018 for resettlement of displaced persons.

Earlier, leader of the Benue Youths, Inalegwu Adakole, condemned the verbal attacks from the minister saying what he did amounted to attacking the entire Benue people.

The protesting youths bore placards with inscriptions such as “We Say no to Open Grazing of Cattle in Benue”, “Akume, Don’t Set Benue Ablaze Again”, “Akume, Livestock Guards is not a Militia Outfit”, “All law-abiding people are protected in Benue” among others.

Adakole said Governor Ortom has demonstrated qualities of a good lawmaker for initiating the Anti-Open Grazing Law, with most states now trailing behind.

He encouraged the government to vie for the Benue North-West senatorial seat come 2023 to contribute his quota to quality legislation in the country.

Receiving the protesters, Governor Ortom, appreciated the show of solidarity by the concerned mothers and the youths assuring them that no amount of sponsored media campaign would stop him from speaking against injustice being done to innocent Nigerians.