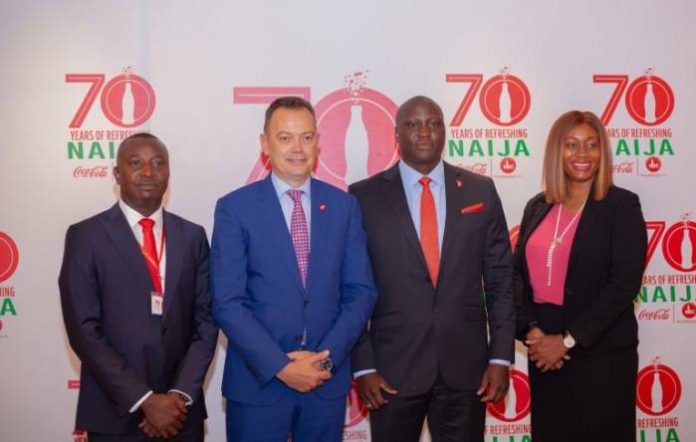 The Managing Director of NBC, Mr. Mathieu Seguin, said this on Thursday in Lagos, during a news conference to flag-off activities marking the company’s 70th anniversary celebration in Nigeria.

The Coca-Cola System, through the bottling arm NBC, was incorporated in 1951.

Seguin said that from 2007 till date, the company had invested $1.7 billion in the country, for the expansion of production capacity, and building of modern warehouses.

He said that the investment included eco-friendly logistics and above all, creation of jobs for teeming Nigerian youths across the value chain.

According to him, in the last five years, Coca-Cola System supported the creation of 58,000 jobs along its value chain, aside many other jobs it has outsourced.

”Over the next five years, we will be investing an additional N560 billion or $1 billion in our operations in Nigeria.

”With the additional capital injection, we are set to expand the capacity of our manufacturing plants in other parts of the country, to mirror the scope of operations at our Ikeja plant.

”This will ensure that all our product types and packaging options be within even closer reach to all our consumers nationwide,” he said.

Seguin said that with eight manufacturing plants, over 7,000 dealers, skilled and dedicated employees, and a sophisticated distribution system across Nigeria, Coca-Cola was within the close reach of consumers.

Speaking on the 70th anniversary milestone, he, said that the company continued to grow, deliberate about investing heavily to make a positive impact in the lives of the people in communities where the company worked and operated.

He said that Coca-Cola believed that its business was only as sustainable as the communities in which it operated, hence, mainstreamed sustainability into every aspect of its business.

”For perspective, in the last 10 years alone, the Coke System has invested more than N9 billion in lifting the living standards of communities where we do business in Nigeria, through locally relevant initiatives.

”Some of the areas we have had the most impact have been in education and youth development, women empowerment, water, environmental sustainability, sports and the promotion of commerce and entrepreneurship,” Seguin said.

Also speaking, the Managing Director of Coca-Cola Nigeria, Mr Alfred Olajide, said that the 70th anniversary celebration was a testament to the possibilities and shared opportunities the company had created in the country.

Olajide said that it was years of investments that had ensured the oiling of the country’s economic gears.

“Years of initiatives that had ensured and fostered community resilience; and years of instilling hope, open happiness, positive feelings and the magic of community in audiences.

He said that the 70th anniversary celebration would run all through the remaining part of 2021 with a line-up of activities designed to celebrate the milestone with the Coca-Cola System’s consumers, customers, employees, partners and the general public.

According to him, the activities will include the Anniversary Stakeholder Event, consumer seeding/giveback programmes, among others.

”In emphasising our current Real Magic philosophy, we will be kickstarting The Nigerians of Coca-Cola campaign, which will serve to tell a visual story of a diverse set of people across key regions in the country with different struggles and positive histories with Coca-Cola.

”These are people that have directly benefited from The Coca-Cola System’s sustainability initiatives – from our value system to our key programme areas, such as women and youth empowerment, waste, wellbeing, and water stewardship.

”As we prepare for more decades of excellence and enriching moments, I believe that there are opportunities for us to learn and listen more.

“And continue to tailor our beverage solutions, to provide our consumers the brands they love at the different phases of their lives, done sustainably for a better shared future.

”We will continue to enable economic empowerment for the people who need it most – downstream and upstream of our supply chain to truly uplift future generations,” he said. (NAN)