A 57-year-old businessman, Abdulhamid Yakubu, on Monday dragged his ex-wife, Maryam Muhammad, before a Shari’a court sitting in Magajin Gari, Kaduna, denying the paternity of a one-year-old boy.

Yakubu, in his petition, said that he raised an alarm on the issue of paternity before the baby was born but the defendant kept saying the child was his.

“Even before I divorced her in March 2021, I told her older sister that the baby was not mine because she moved out of our house without my permission,” he said.

On her part, Muhammad said she gave birth to their son in August 2021 and that the baby belonged to her husband.

After listening to both sides, the judge, Malam Murtala Nasir, ordered the parties to present their guardians in court on Sept.16. (NAN) 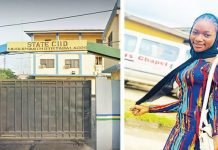