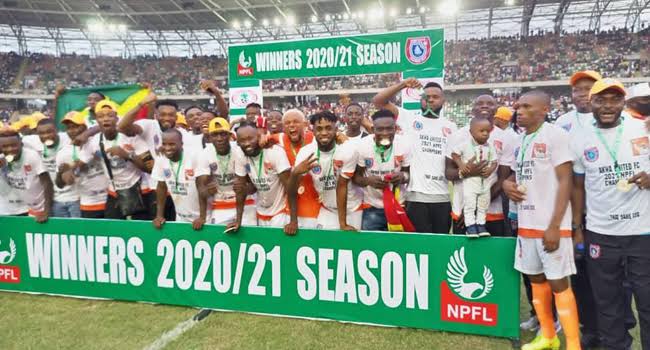 Akwa United Football Club of Uyo on Sunday won the 2020/2021 Nigeria Professional Football League (NPFL), with one round of matches to go in the 38-week competition.

The 25-year-old club, who were winning their first premier league title, beat MFM FC of Lagos 5-2 in their week 37 match.

Akwa United have now moved to 71 points to take an unassailable lead in the competition, with one match day one week away.

They won on Sunday with a flourish, with Charles Atshimene grabbing a hat-trick in the 24th and 85th minutes, and the second minute of final added time.

Alimi Adebayo’s own goal in the second minute of first half added time, and Mfon Udoh’s 62nd minute goals added to their goals’ haul.

They have so far won 19 matches, drawn 14 and lost four, while scoring 52 goals and conceding 22 for a goals difference of +30 to stay miles away from their rivals.

The News Agency of Nigeria (NAN) reports that the competition which began on Dec. 27 of 2020 is scheduled to end on Aug. 8.

But Akwa United’s win on Sunday has taken them nine points ahead of second-placed Nasarawa United of Lafia and third-placed Enyimba International of Aba who have 62 points each.

But they are one game ahead of their closest title rivals, who are playing their week 37 matches on Monday.
While Nasarawa United host Rangers International of Enugu, Enyimba host Sunshine Stars of Akure in their own fixture also on Monday.

If both sides go on to win, and then still win on Match Day 38, they will end up with 68 points each.
Nasarawa United will be away to Abia Warriors of Umuahia and Enyimba up against hosts Dakkada FC of Uyo.

This will still be three points each behind Akwa United, and this is even if the new champions fail to get a point from their own game.

Akwa United will be up against hosts Lobi Stars in Makurdi.

Meanwhile, in other week 37 matches played in the league on Sunday, Katsina United won 1-0 against Abia Warriors while Plateau United beat Dakkada FC 2-0 in Jos.

Three other fixtures, apart from those in Lafia and Aba, were moved to Monday, and these include Adamawa United of Yola versus Kwara United of Ilorin in Gombe.

The others are Rivers United of Port Harcourt versus Lobi Stars and Kano Pillars versus Wikki Tourists of Bauchi.

The tie involving Jigawa Golden Stars of Hadeija and FC IfeanyiUbah of Nnewi in Kaduna has been postponed.

CURRENT STANDINGS AT A GLANCE