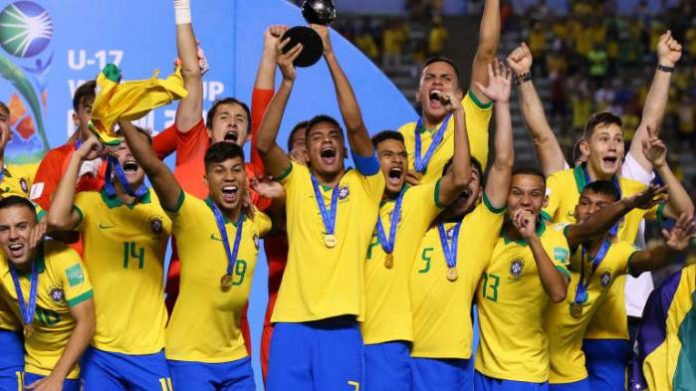 Brazil’s Selecao have won the 2019 FIFA Under-17 World Cup which they hosted.

They beat Mexico 2-1 at the Brasilia’s Estadio Bezerrao to carry the Cup for the fourth time.

Nigeria still leads the pack though, having won the tournament five times even though they crashed out early in the 2019 edition.

For the second straight match, Lazaro was Brazil’s super sub.

On Thursday he capped his side’s comeback against France in the semi-final by bagging the winning goal in the 89th minute.

On Sunday the No20 left it even later. Brazil fell behind in the 66th minute when Bryan Gonzalez beat adidas Golden Glove winner Matheus Donelli with a superbly-directed header.

In the third-place match, France rode Arnaud Kalimuendo-Muinga’s hat-trick to victory over European rivals the Netherlands.

Both teams benefitted from the reintroduction of their captains, who missed their respective semi-finals. Oranje field general Kenneth Taylor assisted the opening goal of the match, flicking a pass over the French defence to play Mohamed Taabouni in on goal.