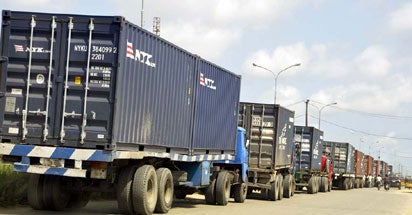 Boboye who decried the continuous carriage of containers by flatbed trailers without proper latching on the highways said such was very dangerous and would no longer be tolerated.

He ordered his patrol teams to immediately impound such vehicles anytime they were sighted.

A press statement by the Corps Pubic Education Officer, Bisi Kazeem, said the Corps Marshal in a bid to get such dangerous trailers off the road has cemented a partnership with the Nigerian Ports Authority to ensure that such vehicles were not allowed to leave the Ports in the first instance unless on the condition of full compliance of the latching and with other maximum safety standards.

READ ALSO: FRSC Impounds Over 40 Moyorcycles Without Licence In Benue

Speaking on the dangers of moving unlatched containers on the road, Oyeyemi said that apart from the danger to lives and properties, these containers when they fall on the highways or any part of the road, can easily lead to unnecessary road obstruction that would cause undue hardship to motorists whose traveling time would be wasted on the road before the obstruction is cleared.

He therefore insisted that to avert such an occurence, the Corps Marshal has directed the Operatives of the Corps to be on red alert and impound on sight, any of such trailers found in the act.

He also disclosed that the Corps would achieve this in friendly collaboration with other law enforcement agencies.

He also beckoned on the public to take advantage of the National Traffic Radio 107.1 FM or the toll free 122 numbers to report any of such trailers seen on the highways without proper latching of containers.