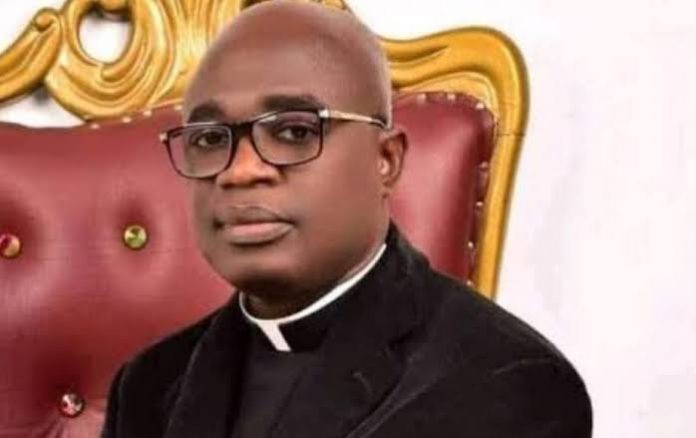 While the All Progressives Congress, APC, in Benue State awaits the affirmation of its 2022 Governorship Primary Elections, the state chairman, Austin Agada, has stated that Fr Hyacinth Alia, remains the Governorship candidate of the party, for the 2023 general elections.

Agada stated this while briefing journalists in Makurdi, in response to what he described as incessant propaganda by the Governor Samuel Ortom led government and its hirelings who they say are pushing that their candidate, Alia, should be substituted.

He vowed that only God can change the name of Fr. Hyacinth Alia as the governorship candidate of the party, not only in the state, but at the national level.

“I want to declare to the hearing of everybody, the press and the Benue people that, Rev. Fr. Hyacinth Iormem Alia, remains the candidate of APC in Benue state.

“For us as a political party, we had given Benue people the assurance that, we will do nothing but what the people want. We have done primaries and the person that emerged is Rev. Fr. Hyacinth Alia.

“Governor Ortom’s administration has failed the people, but I believe that the APC will bring Benue back to the track of development. It is our believe that come, 2023, after we win election, we will not disappoint the people of Benue State.”

He condemned the twists of lies and propaganda by which he said Governor Ortom has chosen to canvass for 2023 general elections votes, from Benue people, saying maligning the candidature of Fr. Alia, who is the best choice for the people, was a wrong move which will not bear fruits.

Agada who explained that Fr. Alia is a bonafide member of the APC from Mbadede council ward of Vandeikya Local Government Area of Benue State, stressed that all the membership Registration Registers, across the 23 local government areas in the State, were accordingly submitted to INEC.

He said as a responsible party, conscious of not deviating from the status quo of the lay down Electoral Laws and procedures, As Amended, “I say this with depth for confirmation that the 23 Membership Registration Registers of our great party, were submitted to INEC”.

“Rev. Fr. Hyacinth Alia is a bonafide member of our political party from Mbadede council ward of Vandeikya Local Government Area of Benue State. And as to whether we submitted our membership registration registers to INEC or not, we absolutely did as a political party that is conscious of the laid down Electoral Laws and procedures.

“We also took further steps as a party to notify INEC for the Direct Primary Election on the 6th of April, 2022”.

“I want to use this opportunity to call on members of our political party, especially those that are aggrieved, that contested in one way or the other that, it is God that gives. They are all competent. The worst amongst the APC candidates, is the best of PDP candidates in Benue State.”

“I call on all of them to join hands with Rev. Fr. Hyacinth Alia, for us to rectify what governance is all about in Benue State. Fr. Alia remains the Candidate of APC in Benue State.”