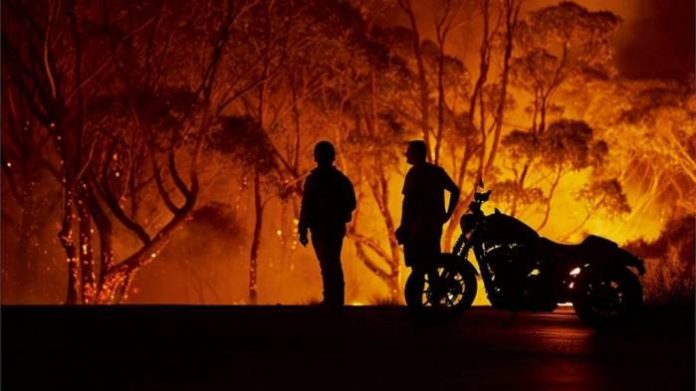 Strong winds that have changed direction are hampering efforts by firefighters to contain bushfires in Australia’s south-east.

In the neighbouring state of Victoria, army helicopters have been deployed to evacuate people trapped by the flames.

Since September, fires in Australia have killed at least 23 people.

More than 1,200 homes have been destroyed and millions of hectares of land scorched. Although much attention has centred on worst-hit NSW, every state and territory has been affected.

Australian Prime Minister Scott Morrison, who has been harshly criticised for his handling of the emergency, has announced the deployment of 3,000 reserve troops to help the fire-fighting effort.

On Saturday he came under fire again for posting an advert on Twitter showing how the government was responding to the crisis, accompanied by an upbeat backing track.

Mr. Morrison faced a hostile reception as he visited some of the worst-hit communities earlier this week.

NSW Premier Gladys Berejiklian said the fires had created a “very volatile situation” and “we are yet to hit the worst of it”.

“We are discouraging people from moving from where they are, given the serious threats and the fact that we have so many fires at an emergency level,” she was quoted by ABC as saying.

Some fire crews have been pulled out of the Snowy Mountains in the state of Victoria due to worsening conditions, The Guardian reports.

Skies reddened and darkened in areas of south-eastern Australia as wind gusts exacerbated the fires.

Temperatures surpassed 40C (104F) in some areas. In Penrith, west of Sydney, temperatures reached 48.9C. Some reports suggest it was for a time the hottest place on Earth.

Two naval ships rescued hundreds of people stranded on a beach after fire encircled the town of Mallacoota in Victoria.

The evacuees were taken to the port of Hastings and transferred by buses to relief centres.

“For someone who’s never been in a fire, it’s very, very, frightening. I’m so happy to be here,” said Emily Wellington, 16, after arriving in Hastings.

In the Batemans Bay and Moruya region in NSW, thousands of people are without power as a result of fire damage. Provider Essential Energy has warned this will continue overnight as it is not able to access the damaged area safely.

Emergency warnings were issued throughout the day urging residents to leave certain areas, while some were told it was too late to evacuate. They were instructed to find shelter.