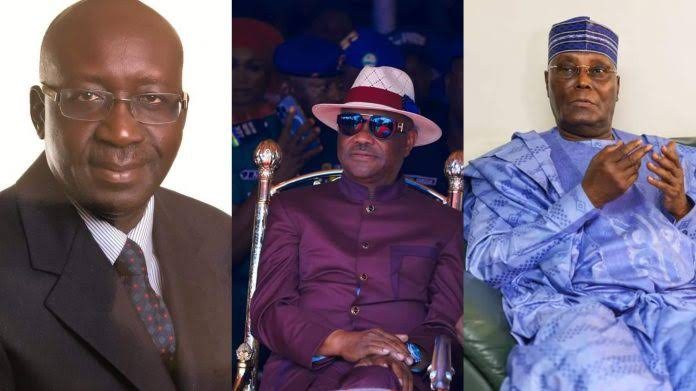 Rivers State governor, Nyesom Ezenwo Wike, has vowed to sustain the fight for a return to healthy party structure that will allow for an even representation of the interest of the north and south in the national leadership of the Peoples Democratic Party (PDP).

The governor said the current leadership structure where the north holds the presidential ticket as well as the national chairman positions is against the constitution of PDP and a gross injustice to the south.

Governor Wike made the observation at the inauguration of the Ahoada campus of the Rivers State University and flag-off of staff quarters, which was performed by Oluwaseyi Makinde, Governor of Oyo State on Thursday.

He noted that the current hierarchy of the PDP does not give room for the interest of the south, particularly when decisions are to be taken.

According to him, the resignation of the BoT chairman is a distraction because the PDP’s presidential candidate, Atiku Abubakar, had told him that the national chairman of the party, Dr. Iyorchia Ayu must relinquish his position.

“Ayu said if the presidential candidate comes from the north, that he will resign after the convention of our party, and that the chairman of our party will come from the south. When the north central leaders met in the house of Bala Mohammed, governor of Bauchi State, he said so there. When he met the caucus of the Senate, he told them that.

“Now, when we finished our convention on Sunday, the candidate of the party came to see me in my house in Abuja on Monday around 10:30am. The candidate told me I want us to work together, and then he said, look Ayu must go. I said why? He said because when a candidate comes from the north, the chairman will come from the south.”

Governor Wike challenged the presidential candidate of PDP to deny the comment and be ready to hear many other things that had transpired between them relating to the current crisis.

“And I’m saying implement what you told me. What offence have I committed? It is nothing to do with Wike. It has to do with integrity. This is what he told me. I challenge the presidential candidate to deny this. If he denies it, I will go further to say so many things to Nigerians because enough is enough. We can’t continue this way.”

He described the resignation of the BoT chairman as a charade and vowed to continue the fight for the right thing to be done in the PDP.

“One ex-general went to see the BoT chairman and the candidate (Atiku) too went to see him to resign, that we’ll give you advisory position. The BoT position is already advisory. What advisory position are you going to give him? That is to insult us. And all of us are here. Our people are there not knowing what is happening. You think it’s Wike. It is you. It is your children. How can we be here the chairman and presidential candidate will meet, they will take a decision, nobody represents us. Just wait, pray let them win then you will see.”

The governor accused some vested interest in the PDP of being arrogant because they are being backed by someone in the presidency. He, however, warned them to also bear in mind that an APC presidential aspirant they were relying on, failed to clinch his party’s ticket.

READ ALSO: We Can Win Elections Without Disrobing Nigeria Before Global Community — Fashola

Governor Wike said it is erroneous to think that he was bent on destroying the party when he was actually advocating for justice and equity.

“We have finished the presidential primaries. It is over. So, when people said you want to destroy the party, because you didn’t win primary, I think they’re sick. They have some mental problems.”

The Rivers State governor also took a swipe at the former governor of Niger State, Alhaji Aliyu Babangida, who is accusing him of destroying the party.

“Nigerians may forget, but such an empty barrel; one man they call Aliyu Babangida, he came out on national television to say somebody is destroying the party because he didn’t win the presidential primary. That’s an insult.

“That’s a lie, he said that I’m trying to destroy the party because I didn’t win the primary. For Christ’s sake, in a contest there must be a winner, there must be a loser. I have no regrets.

“We contested the election very well and we are not ashamed. If Aliyu knew he was important and strong he would have picked form, let us deal with him.”

Performing the inauguration of the Ahoada campus of Rivers State University and flag-off of Staff quarters, Governor Oluwaseyi Makinde of Oyo State, noted the untiring efforts of governor Wike to deliver quality projects round the calendar.

Such leadership, Makinde noted, has changed the fortune of Rivers State and urged the people to continue to support him.

The Commissioner of Education, Prof. Chinedu Mmon, who described governor Wike as an icon of education, said the decentralisation of the RSU will boost socio-economic activities in the communities where the new campuses are located.

On his part, the Rivers State Commissioner for Special Projects, Deinma Iyalla, said the staff quarters will have a total of 12 flats; 6 units of 3 bedroom and 6 units of 2 bedroom of two blocks of one storey building.