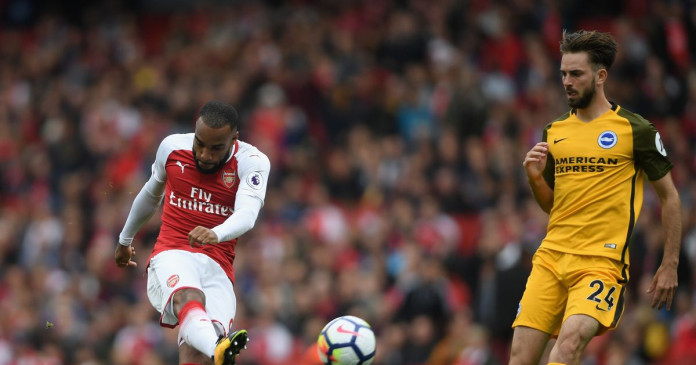 An important and efficient win. This would be the best way to describe Arsenal’s 2-0 victory against Brighton and Hove Albion on Sunday. Brighton did not pose any threat and the Gunners ensured the victory with an effective display, without ever quite catching alight.

Arsene Wenger rested and rotated several players from Thursday’snight trip to Belarus, and he will be pleased to see his side continue to build on their momentum entering the upcoming international break.

It was immediately clear from kick-off what the pattern of the game would be. Arsenal played the ball back into midfield from the centre-circle, and Brighton quickly dropped into their own defensive third, utterly disinterested in pressing the ball up the pitch, more than happy to relinquish possession, trying to remain compact and disciplined.

It was a tactic that did frustrate the Gunners at times. In the opening 10 minutes, Arsenal had 77% possession and only had several long shots to show for their efforts. Now, one of these was a thunderous strike from Alexandre Lacazette that cracked the post after the ball sat up nicely to be struck sweetly and viciously. But they weren’t chances of the clear-cut nature.

And the first goal actually came from a scrappily converted set-piece. Granit Xhaka clipped a cross from a wide free-kick towards the back post, Alexandre Lacazette did well to keep it in, heading the ball back into the penalty area, and after Brighton cleared off the line and Hector Bellerin’s effort was blocked, falling to the feet of Nacho Monreal, the Spaniard lashed home emphatically.

But after the goal, Arsenal stepped off the gas a little and allowed Brighton to grow into the game. They exploited the immobility of Granit Xhaka in midfield, who had a lot of ground to cover, and utilised the direct play of Solly March on the left flank to force defensive errors. They won a series of corners that, if for a better delivery, could have caused issues, and pressed their hosts back into their own penalty area, crossing accurately and dangerously from wide areas. Their best chance, though, came from a wonderfully work free kick. Feigning a cross, Brighton cleverly shifted the ball centrally, setting March up for a long-range effort with time and space to unleash. March struck it beautifully, seeing his shot crash against the post. The rebound did fall to Lewis Dunk at the far post, but the awkward bounce made it difficult, and he was unable to direct his shot goal wards.

As the half drew to a close, chances came at both ends. Alexandre Lacazette, after a poor Brighton pass gifted him possession, curled a shot straight at Matt Ryan, though he should have slipped Alexis Sanchez in instead of shooting; Ryan then made an excellent save from Aaron Ramsey after Arsenal blistered forward in a scintillating break involving Alexis Sanchez, Hector Bellerin and Sead Kolasinac; and Brighton also had chances at the other end, the best of which fell to Davy Propper, who tried to curl his effort into the top corner from just inside the area, but was unable to achieve the desired the bend.

It was a fairly comfortable 45 minutes of football for Arsenal, and with the one-goal cushion entering the break, the priority in the second half was simply to manage the game, limit Brighton’s attacking threat, and secure the three points.

It was clear early on in the second half that Arsenal were wanting to kill the game efficiently and effectively. They moved the ball through the phases with greater pace and precision, there was far more energy and intensity in their movement and their pressing, and they scored the crucial second goal as a result.

It was a flowing, sweeping move, with neat, intricate play between Aaron Ramsey, Alexis Sanchez and Alexandre Lacazette. It ended with Sanchez brilliantly back heeling a pass into Alex Iwobi’s feet, who took his time to set himself, before rifling a shot past Ryan from close range. It was a lovely goal, indicative of some of the football that Arsenal played in the second half, and all but sealed the three points for the hosts.

Arsenal did continue to create chances in the second half, although they couldn’t convert. Alexis Sanchez buzzed around, desperately searching for his goal, seeing a low, curled effort excellently tipped around the far post by Matt Ryan, Alexandre Lacazette had a shot blocked by Lewis Dunk, who was stretching every sinew to recover his position, while Solly March denied Sead Kolasinac, clearing off the line from a corner.

Ultimately, Arsenal saw off Brighton effectively. The introduction of Glenn Murray did pose a new threat from the Seagulls, as they looked to bombard the box with cross after cross after cross. Murray glanced a header just past the post, getting in front of both Monreal and Mustafi in the process; Mustafi then was forced to flick a header past the far post with Murray lurking behind him; while Cech remained vigilant, collecting well from set pieces, and punching clear when necessary.

This was an efficient victory for the Gunners, who now move six points behind the Manchester clubs, and level on points with Chelsea. With the international break now upon them, Wenger and his players can reflect on a stabilising period after the four-goal thumping at the hands of Liverpool. They are yet to play their best football, but they are winning, and winning well, and that is important as the depths of winter football loom.