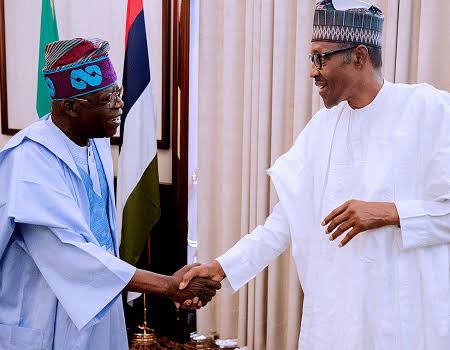 Speaking to State House correspondents after the meeting, Tinubu pledged to sustain Buhari’s legacies when he wins the election and is sworn in as his successor.

He commended the president for providing a level-playing field for the process of selecting the party’s presidential candidate.

He recalled that the president had promised many times that he would support the democratic process and he had proven that with the party’s Presidential primary, which he won.

“He promised the whole country and the world that he will build a legacy of transparency and consistency. Legacy of a level-playing ground for all the aspirants. He will be committed to democratic principles and values and he did so.

“He didn’t endorse anybody, he didn’t impose anybody, he did not, at any time, attempt to tinker with the process of this election to favour one tribe or the other. He was steadfast, he was trust worthy, he was dependable, he was a leader,

“If he had to give it to anybody, it’s not my victory that is important, it’s the process and the management of that election that gave it to President Muhammadu Buhari,” he said.

Asked also of the choice of his running mate, he said “I won’t tell you that. That is my right, it’s in my pocket book.”

The APC presidential candidate was accompanied on the visit by Gov. Babajide Sanwo-Olu of Lagos State and Wale Tinubu.

President Buhari had on June 8 congratulated Tinubu, the APC Presidential Flagbearer in the 2023 elections.

He said: “Having emerged victorious he has our full and unwavering support.

”Now our party must unite behind our candidate to achieve victory at the 2023 elections so that our government will continue to secure our communities, grow our economy and continue the fight against corruption.” (NAN)