A gubenatorial aspirant of the APC in Akwa Ibom, Prof. Chris Ekong, has described as fallacy, insinuations by the state Resident Electoral Commissioner, Barr Mike Igini that the party has no governorship candidate in the state.

Ekong told journalists in Uyo yesterday that whatever sentiments expressed by Igini were personal and not the position of INEC adding that the guber primary that produced Mr. Akan Udofia as candidate was sanctioned by the national leadership of the APC.

“I am very happy they are saying that APC might not have a guber candidate. The ‘might’ in their statement tells you explicitely that they are merely insinuating, but I want to tell you that APC has a guber candidate. Primaries were well conducted and the person who won was Akan Udofia.

“Don’t forget I was part of the primaries as an aspirant. I know some of the aspirants want to be talked to while some want to play the spoilers’ role.

“It is even unfortunate that one of us who was the National Secretary of the party and supretended over elections to elect people to fill the leadership structure of the party could not have even an ex-officio member in the leadership of the party in the State (from the ward to state chapter levels of the party). And if that has happened and he wants to stoke fire, he can go ahead. These are the things they have been doing and profiting from.

“But coming round to say we don’t have a governorship candidate is a fairytale and amusing and who are they using to garnish their story, they are using Igini,” the former state Youth and Sports Commisioner said.

He expressed regret that Igini has allowed his personal issues with some politicians in the state to override his official assignment.

“You see, Igini works for INEC and he is not the chairman of INEC and he is not INEC and he is privy to the fact that APC National Caretaker Committee, represented by Buni and Udoedeghe went to Court and were defeated at the lower court. They went to Appeal Court but later used their hands to withdraw the case, saying and affirming that they recognize Ntukekpo as the State Chairman of APC in Akwa Ibom State.

“The national leadership of APC wrote to Mr. Ntukekpo to inform INEC in the State to come and monitor the APC governorship primaries in the State, and Igini sat here and said no, Ntukekpo can never be even when INEC was part of the Court process. I think something is wrong somewhere. This is suggestive of growing insinuations on ground that Mr. Igini is a ‘factional leader or Chairman o INEC’.

“What I want to tell Akwa Ibom people is to forget that negative propaganda. Akwa Ibom APC has a governorship candidate and he is Akan Udofia and by next week he will be given the flag and when he collects the flag we will bring it here.” Ekong said.

He maintained that the party is no longer factionalized after the exit of the group that perpetuated crisis adding that unity and reconciliation remained key to the party winning the governorship election which has eluded it since 2011.

“For now there is no faction in the APC in the state. Members can have issues which happen in every party especially after primaries of this nature. But there is always room for reconciliation. The person that wanted to create factions have moved to NNPP and he is happy there.

“So my message to all APC faithfuls is that there is no time as beautiful as now for us to take power. We have been trying since 2011 and this is our time.

“For people that read the Bible, when Jonah was in the boat, people in the boat experienced turbulence and the boat could not sail freely and when they decided to put Jonah out of the boat some of them pitied him that he will die but they still had to.put him out of the boat and immediately that happened the boat returned to its peace and everybody was happy.

“This is what has happened to APC in Akwa Ibom. We are back to our point and position of peace and the turbulence is over, it is now for our members to come, let us hold our hands together and work our party to victory in Akwa Ibom,” Ekong concluded.

In the meantime, another chieftain of the party, Barr. Victor Iyanam has called on the leader of the party in the state, Senator Godswill Akpabio’s to expediate action aimed at uniting that party and reconciling aggrieved members inorder to reposition the APC to win next year’s governorship election in the state.

Iyanam, a former Attorney General and Commissioner for Justice in Akwa Ibom said such move would save the party from further disintegration and strengthen it to effectively challenge the PDP in next year’s gubernatorial election in the state.

“We are lucky to have a former Governor and minister in the person of Senator Godswill Akpabio and so I am calling on him to convene a caucus meeting so we can contribute our ideas towards uniting the party. He should talk to people in a way that will boost their confidence and create cohesion within the party so that we can move forward.

“We should be celebrating that we have someone like him to counter what the PDP is doing but unfortunately I don’t know if it is the former minister we should blame or the people hanging around him that are causing the disintegration of party leaders. It is very sad that all of us have invested so much in the party since 2014 and some people are coming to spoil it for everybody.” He said. 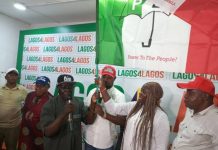 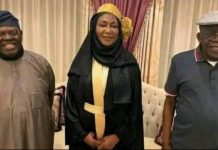 I Spent Hours With Tinubu; His Dementia So Bad He Can’t Drink By Himself: Naja’atu Muhammad