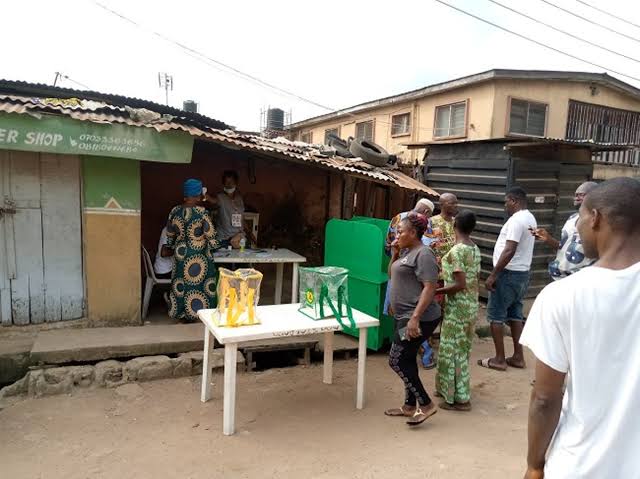 However, the poll was largely peaceful as there was no record of violence or security breach during the election.

Officials of the Ogun Independent Electoral Commission (OGSIEC) arrived some of the polling units late, thereby delaying commencement of election in many areas.

When our correspondent visited Oba ward 7 PU 1 at about 1pm, less than five voters were seen on the queue and a pip into the ballot boxes showed scanty thumb printed ballot papers.

The Chief of Staff to Ogun State Governor, Shuaib Salis attributed the initial delays due to logistics, but believed the turnout was encouraging and delightful.

In Iperu, the hometown of Governor Dapo Abiodun in Ikenne Local government area of the State, residents violated the restriction of movement order of the State government, as they went about their normal businesses.

There was unhindered vehicular movement and many shop owners opened for business and were seen attending to their customers.

At the Abeokuta-Sagamu expressway, a joint security team, comprising military officers, police, Nigerian Security and Civil Defence Corps (NSCDC) and Amotekun corps had a difficult time in enforcing the restriction of movement order of the government as passengers and motorists insisted on traveling into the state.

As at 10.30 am when our correspondent arrived the Ita-Osanyin, ward 3, unit 2 where the Governor later cast his vote, only 98 voters out of the 826 registered voters had voted.

In Ogun West Senatorial district, the situation was the same in Yewa North local government area of the State as residents preferred to engage in other activities instead of casting their votes.

In ward 2, Ayetoro area of the local government, voters were seen strolling into polling units in their few numbers to cast their vote.

“For the areas we have covered so far, it has been peaceful, but there seems to be apathy,” he said.

“You have a polling unit or a ward of almost 1,000 registered voters and as of the time we visited there, only about 10 voters had been accredited and voted, that is to say that the turnout is very, very low, but that does not foreclose that they may not come. As at the time we were capturing them, the turn out was very low.”

The State Commissioner of Police, Edward Ajogun who led other heads of security agencies in the state to monitor the election in Abeokuta, expressed satisfaction with the security of the exercise.

Ajogun told newsmen that from the reports across the state there was no record of violence or security breach during the election.

“Security arrangement is tight and it is a deliberate one, one that we arrived at through joint assessment and analysis of the situation,” he said.

“And so far so good, the information from our men on the field and of course, the stakeholders and the OGSIEC officials, it shows that everything was going on well.”

Abiodun cast his vote at the Ita-Osanyin, ward 3, unit 2 in Iperu in Ikenne local government area of the state.

Speaking with newsmen, he assured that his administration will continue to respect the autonomy of the local government and give them the necessary support to carry out their constitutional responsibilities as the third tier of government.

“I will not want to speak about what happened before I assumed office, but I believe that what currently obtained at the local government level is night and day compared to what happened before I assumed office and that is why you can see the evidences and the testimonials of what the local government caretaker committees have achieved in their 18 to 20 months in office because we have ensured that there are execution of projects which are funded in line with the constitution.

“We will respect the autonomy of the local government in line with what we at the Governors’ Forum have decided to do and how we decided to implement it.”