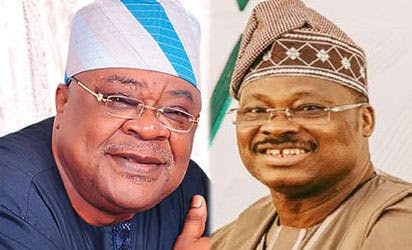 The duo, in their separate statements made available to journalists on Friday, described the late former governor as a focussed and committed statesman.

Ajimobi, who died at the age of 70, was the first civilian governor to rule the state for two consecutive terms.

Ajimobi was, until his death, the Aare of Ibadanland and Deputy National Chairman (South) of APC.

Alao-Akala, in a statement signed by his Media Aide, Tolu Mustapha, said that he now appreciated the late Ajimobi more than before.

“I have lost a friend, colleague and brother in the late Sen. Abiola Ajimobi. I appreciate him more now than before.

“Though we had our fair share of disagreements, I still have great respect for him,” he said.

The former governor said that they were just beginning to understand each other better as statesmen when Ajimobi passed on.

“He did his best for Oyo State as far as his conscience permitted him and I’m quite sure he is fulfilled wherever he is as far as governing the state is concerned,” he said.

“He is sorely missed, one year after. His giant strides remain unmatched two years after leaving office,” he said.

The APC leader commended Ajimobi’s widow, Florence, for strongly holding forth in the absence of his friend and brother.

The minister, in his statement, described the late Ajimobi as a committed progressive who set the state on the path of development.

“Sen. Ajimobi was, undoubtedly, a core progressive in words and deeds. While in office, he chose the road less travelled, one that set Oyo State on the path of progressive development.

“Now, many people know better. The difference is clear. He was undeterred, focused and committed to expanding the frontiers of good governance,’’ he said.

Dare said that the people of the state would remain appreciative of Ajimobi’s leadership and stewardship, particularly in the area of security and infrastructural development.

“Ajimobi’s people orientation and devotion saw him working to create a safe and conducive environment for businesses, individual enterprises and political activities.

“His stewardship in the areas of security and infrastructural development also made Oyo State attractive and relevant,” he said.

The minister urged APC members in the state to close ranks so as to deliver people from the ‘clutches of political retrogression’. (NAN)