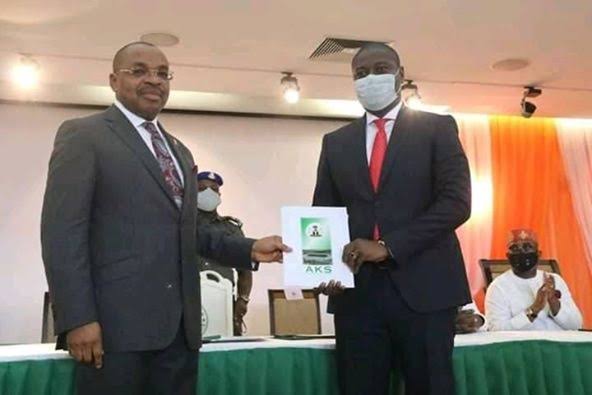 The Akwa Ibom State Governor, Mr. Udom Emmanuel, on Monday swore in eight new commissioners and special advisers after confirmation by the State House of Assembly.

This was followed by assignment of portfolios to both old and new commissioners and Special Advisers, which was announced in a release by the Secretary to the State Government, Dr. Emmanuel Ekuwem.

Dr. Ekuwem said the exercise was part of the continuous drive to strengthen all organs of government for the actualization of Mr. Emmanuel’s Completion Agenda.

Of the 22 members of the executive council, 12 have retained their portfolios, two re-assigned and eight new hands have been assigned.

Mr. Charles Udoh was moved from Information and Strategy to Environment and Petroleum Resources while Pastor Sunday Ekanem Ibuot was moved from Bureau of Political and Legislative Affairs to Labour and Manpower Planning. 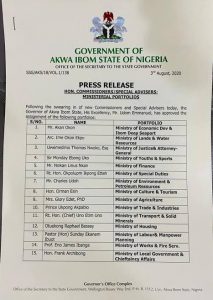 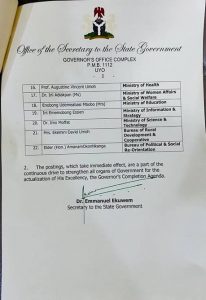 Others are Mr. Ini Emembong Essien who is assigned Information and Strategy; Dr. Imo Moffat supervises Science and Technology while Elder Amanam Nkanga goes to Political and Legislative Affairs.

The new Commissioners and Special Advisers were11 sworn in by Governor Udom Emmanuel on Monday, August 3, 2020, at the State Banquet Hall.