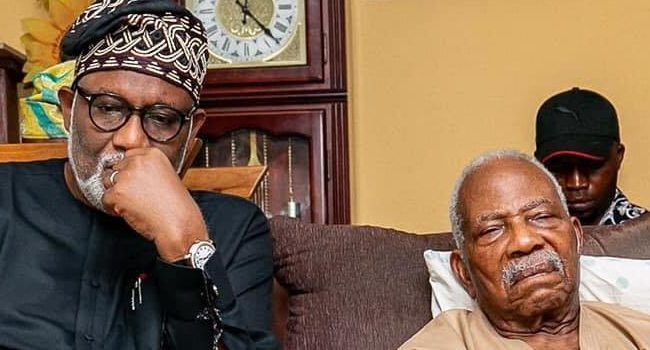 Akeredolu gave the advice in Akure while speaking with newsmen during a condolence visit to the residence of Pa Reuben Fasoranti, the leader of the Pan – Yoruba socio-political organisation, Afenifere, over the death of his daughter, Mrs. Funke Olakunrin.

The News Agency of Nigeria, NAN, recalls that Olakunrin was shot dead on Friday by gunmen at Ore Junction in Ondo State.
He also condoled with Mr. Idowu Olakunrin, the husband of the deceased.

The governor described the killing of Olakunrin as an ugly incident and a death too many.

“All of us are worried. There are some measures that have to be taken and we must prevent this.

“We must take whatever steps we want to take to tackle this issue of insecurity in order not to allow this happen again.

“It is a personal loss to all of us. For now, it is like we are mourning a relative that has just passed on,” the governor said.

Akeredolu promised that the state government would brief the media adequately about the steps and measures to be taken very soon.

The governor was accompanied by his Chief of Staff, Gbenga Ale, as well as Ade Adetimehin, the Chairman of All Progressives Congress, APC, in the state and other members of the State Executive Council.