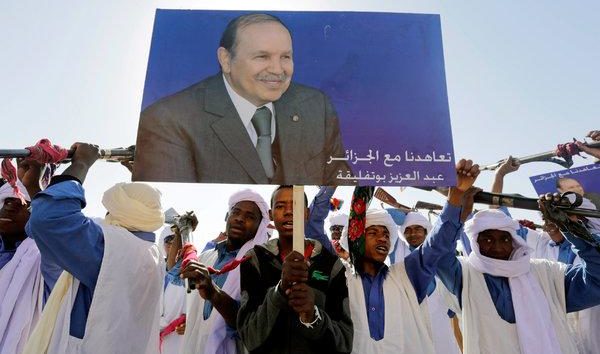 Mr. Bouteflika, who has been in power for 20 years, had already dropped plans to seek a fifth term as opposition to his rule grew.

The powerful Algerian army had called for the 82-year-old to be declared incapable of carrying out his duties.

The ailing leader suffered a stroke six years ago and has rarely appeared in public since.

There was celebration in the streets of the capital, Algiers, following the announcement of his resignation.

One man, Selmaoui Seddik, told Reuters: “God willing, we will have a 100% democratic transition, this is very important. We need to remove the whole previous regime and that is the hardest thing.”

One protest leader, Mustapha Bouchachi, said before the announcement that any decision by Mr. Bouteflika to quit would still change nothing and that the protests would continue.

News of the resignation came in a statement carried on state news agency APS.

State TV then reported that this would be with immediate effect.

According to the constitution, the Senate speaker should take over as interim head of state until fresh elections are held.

Pressure had been building since February, when the first demonstrations were sparked by Mr. Bouteflika’s announcement that he would be standing for a fifth term.

Tens of thousands protested across the country on March 1. Mr. Bouteflika’s promise not to serve out a fifth term if re-elected, along with a change of prime minister, failed to quell the discontent.

Leaders of the protests also rejected Mr. Bouteflika’s offer this week that he would go by the end of his current term – 28 April – as not quick enough.

It seems the powerful military agreed. Its chief, Lt Gen Ahmed Gaed Salah, said earlier on Tuesday: “There is no more room to waste time.”

The demonstrations have also called for the whole political system, in which the military plays a significant role, to be overhauled.

Many of the protesters are young and say they want a new system of government.

There were accusations that Mr. Bouteflika was being used as a front by “le pouvoir” – a group of businessmen, politicians and military officials – to retain their power.

Elections originally scheduled for 18 April were postponed and the governing National Liberation Front (FLN) vowed to organise a national conference on reforms.

The FLN has ruled Algeria since the country won independence from France in 1962 after seven years of conflict.

The chairman of the upper house of parliament, Abdelkader Bensalah, is expected to become caretaker president for three months until elections.