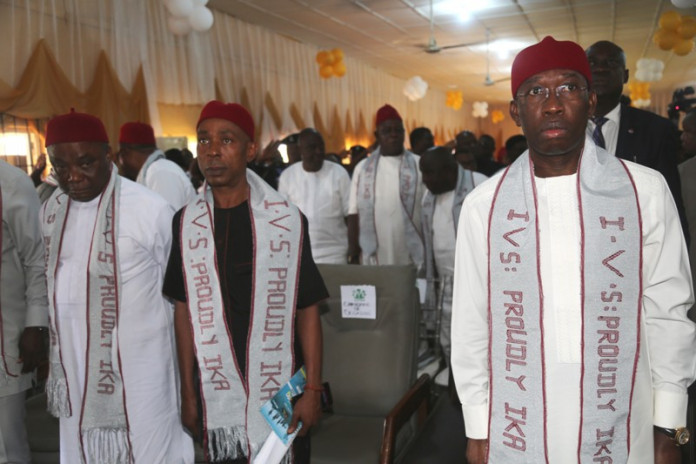 Ahead of the 2018 local government elections in Delta State and the 2019 general elections, over 5000 All Peoples Congress (APC) members in Orogun, Ughelli North Local Government Area of Delta State have defected to the Peoples Democratic Party.

This happened just as Governor Ifeanyi Okowa assured those who defected to the PDP that the party would provide a level-playing field for them.

Addressing  the new members, Okowa observed that the APC and most political parties in the country were populated by former members of the PDP and the doors of the PDP were open to those who desired to return.

“You are returning home to your family, a family where there is no discrimination.  Those who wants to return are free to do so because, working together, I believe we will win in all elections,” Okowa said.

The reception for the new members was carnival-like and present were top politician in state, including Governor Okowa.

The governor commended the courage of those who defected to the PDP.

“It is in the best interest of the Urhobo people to remain in the PDP, we will continue to consolidate on the success of the PDP since 1999, I will not discriminate in the act of governance.”

The governor added that “we will achieve the Delta State of our dream where everyone will relate as brothers and sisters when we work in unity.”

Hon. Akpoyibo had in an address, said, “PDP has brought hope and smile to millions of people, both old and young, educated and not educated; today, APC leadership and members alleged that economic meltdown, recession and all the problems in Nigeria are caused by PDP,  can  APC leaders or members say that they were not at one time or the other the shakers and movers of PDP?

“All APC members today came from PDP, therefore, the present leadership of APC are to be held responsible for the problems in Nigeria. PDP made me who I am and others today, therefore, we have decided to go back to the mother and father of all political parties in Nigeria, the PDP,” he said.

“PDP is a healthy party with leadership that has the interest of its followers at heart,” he said further.

Another of those who defected, Sylvester Ovbije said, “I am leaving APC because the party is filled with liars and deceptive people.”

Chairman of the occasion, Brig-Gen. Dominic Oneya (rtd) and other PDP chieftains in the area, Chief Grace Odin; Hon. Samuel Mariere; Hon. Eric Oharisi; Hon. Solomon Awhinawi; Terry Noah; Dr. Steve Oru; Olorogun David Edevbie and others who spoke at the occasion observed that the leadership qualities of Governor Okowa had increased the fortunes of the PDP in the state.

Meanwhile, the Executive Assistant to the Governor of Delta State on Marine Development, Oghene Karo Ekewenu, has said that the recent defection of APC members to PDP had shown that Governor Okowa transformation agenda was on course.

Said Ekewenu:  “It’s paramount to us in the People’s Democratic Party PDP in Delta State to receive over 5000 All Progressives Congress APC decampees back to PDP.”