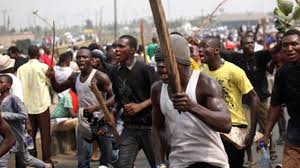 Three men suspected to be kidnappers were on Saturday caught and burnt alive in Akpabuyo, Cross River State.

The Next Edition learnt that the men has their heads cut off before they were burnt.

It was learnt that the suspects were allegedly about to abduct a victim but luck ran out of them and the victim raised the alarm as they struggled.

The alarm attracted residents and passers-by in the area who descended on the suspects.

Meanwhile, the Commissioner of Police, on the state, Abdulkadir Jimoh, has issued a statement condemning the act.

The Commissioner in the statement signed the Command’s Public Relations Officer, DSP Irene Ugbo, warned the public against jungle justice.

The statement titled, ‘Jungle justice and its implications,’ read in part: “The attention of the Commissioner of Police, Cross River State Command, Abdulkadir Jimoh, has been drawn to the incessant mob action meted out to criminal elements across the state. It’s because of that, that the commissioner wishes to state unequivocally that no person or group of persons has the right to maim or take the life of another person irrespective of the offence committed.”

Jimoh warned that perpetrators of such cruel acts when apprehended would face the law.