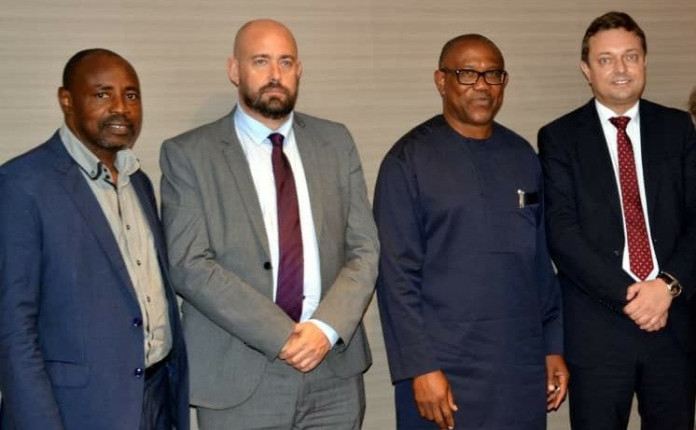 Vice Presidential candidate of the Peoples Democratic Party, Mr. Peter Obi has called on the international community to intensify efforts to prevent the ruling All Progressives Congress, APC, from intimidating candidates of opposition political parties who, according to him, now live in fear.

Obi spoke on Wednesday in Abuja when he met with delegations from European Union (EU) and World Economic Forum (WEF) to discuss the need to conduct free and fair elections in 2019 and how to grow the nation’s economy through collaboration.

Representing the Presidential candidate of the party and former Vice President of Nigeria, Atiku Abubakar at the two separate meetings, Obi maintained that the EU should insist on a level playing field for all candidates and parties during elections in Nigeria because “there is a need to get the country back to its feet and make it better for our children.’’

According to him, campaigns should be based on issues in order to allow the electorate as well as the international community come to grasp with the problems of the country and the solutions being proffered by each of the political parties and their candidates.

The former governor of Anambra further said that there was need for agencies such as the EU to strengthen and support the Independent National Electoral Commission (INEC) pointing out that “judging from what happened during gubernatorial elections in Ekiti and Osun states, INEC needs to show that it remains an unbiased umpire in future elections in the country.”

On the issue of vote buying, Obi described the incidence as a new phenomenon which must be stopped.

He maintained that there was no doubt about the unity of the PDP adding that the evidence could be seen from the outcome of the free and fair presidential primary election conducted in Port-Harcourt, Rivers State on October 13, 2018, where all the presidential candidates agreed that it was the best so far.

On whether there was need for a fresh EU election observer group following the impending expiration of the tenure of the present group, Obi said that Nigeria deserved a replacement based on the role EU would play in ensuring free and fair elections in Nigeria in 2019.

In his comments, the head of the EU delegation, Ketil Karlsen said that the election observer group has been consulting stakeholders in Nigeria to ascertain whether or not it would be necessary for the union to send a new EU election observer mission.

He said that the EU mission had been operating in Nigeria since 1999 and that the union had invested over 100 million Euros in Nigeria’s election process since then.

At the meeting with officials of WEF, Obi stressed the need for closer working relationship with African countries especially Nigeria because most governments in the continent do not want to work with the forum for fear of being criticised.

He lamented that many governments in Africa focus on activities that are“ transactional instead of transformational’’ and therefore needed help to shape their policies.

“A lot of work needs to be done in Africa because things are tough,” he said, adding that Presidential and Vice Presidential candidates of the PDP “have a clear picture of what the economic priorities are and what the international community feels about the country.

“Nigeria needs to do something immediately for its economy to be put back on track and something has to done immediately’’, he said.

Leader of the WEF delegation, Nontle Kabanyane said that the forum was ready to strengthen relationships and to implement more activities in Nigeria through a collaboration that would lead to national transformation.