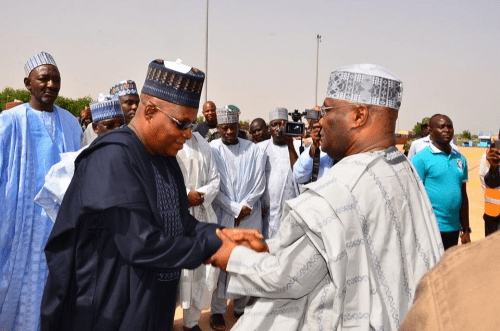 Former Vice President, Alhaji Atiku Abubakar, has described as intolerable, the spate of killings in the country, declaring that he would bring insurgency to an end if voted in as president.

Atiku is a presidential aspirant on the platform of the  Peoples Democratic Party, PDP, ahead of the 2019 election.

Blaming the case of incessant killings on alleged insincerity in the management of the security situation, particularly the fight against Boko Haram, he said given the opportunity, he would solve the problem without delay.

Atiku who spoke in Maiduguri, Borno State on Tuesday, declared that, for instance, he would not hesitate to sack any security chief that could not ensure safety of lives and property.

His words:  “Here we are sweating to end an insurgency that is mostly domiciled in just two states, Borno and Yobe and we cannot even see its end in nine years. This is unacceptable. There is no way I can tolerate any security chief that will come and inform me that he cannot end this war in three years. Such security chief will not last the next day on seat.

“I swear in the name of God that the service chief must go.

“I was flying about 35,000 feet over Borno and Yobe states few hours ago, and all I could see were nothing but open plain lands; yet someone on ground will be telling me that he cannot see where Boko Haram insurgents are.

“I hereby promise you all that should I be elected as president, the issue of insecurity will become a thing of the past. I know there is insincerity in the management of the country’s security.

“This is the time for us to wake up and forge a common front in our struggle to salvage our children and grand children from future calamity by supporting our cause.”

He also deplored the poor situation in the country in general.

According to him, there must be an end to the problem of unemployment and poor healthcare services in the country among others.

“Today, our schools and our healthcare systems are not functioning; our youths are roaming the streets jobless; yet there is a government in place. We must also recall that this is the same Nigeria whose security forces had been able to fight a civil war and kept the country united in just about two years and six months only. And most of the soldiers that fought on the side of Nigeria are from the north,” he said.