Zinedine Zidane has been named the best manager in the world by L’Equipe – beating Jurgen Klopp and Pep Guardiola to the honour.

The Real Madrid boss, 48, led his side to the LaLiga crown after a three-year drought.

Zidane beat Premier League giants Klopp – who won the league with Liverpool for the first time – and Guardiola, last season’s English top-flight-winning boss, to the No1 spot.

But while L’Equipe were full of praise for Klopp and Guardiola, as well as their champion, Zidane, they had little nice to say about Jose Mourinho.

This what they said:

NATURALLY full of praise for the French boss, L’Equipe praised Zidane for helping Real Madrid get back to the top of Spanish football.

They wrote: “[Zidane] is a coach who has experienced only one club, and quite rarely defeat.

“He was able to return to the footsteps of his own glory and question everything to become Spanish champions with Real Madrid last month.”

THE only blot on the Manchester City boss’ record appears to be his overly-attacking mindset, according to L’Equipe.

They wrote: “Guardiola has something else, his dogma, his permanent research, the virtuosity of his collective game, dizzying constructions, his consistency…

“But he does not have everything, and chooses his central defenders as his attackers or midfielders.”

THE German may have led Liverpool to their first-ever Premier League title – and first league crown in 30 years – but L’Equipe were more focused on his “charisma”.

The French publication described Klopp as a “fashionable man” and “favourite of many”.

Hardly the level of praise they reserved for Zidane…

ONCE revered as the “Special One”, L’Equipe reckon Mourinho has lost his “magic” and has been “aged” by his struggles to keep apace with Pep and Klopp.

They wrote: “Jose Mourinho has lost his mojo for some time.

“He has been weakened by the damaging atmosphere of his reigns at Real Madrid, Chelsea and Manchester United.

“Here he is at Tottenham, staying true to himself – still as efficient in the negotiations, still brilliant in press conference, still boring in the game, but seemingly a million miles from his former glory. 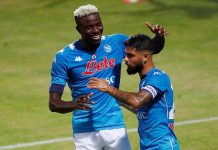