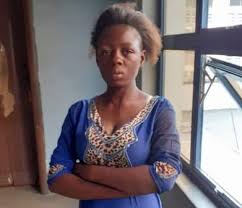 Police in Lagos have arrested one Stella Peter for allegedly stabbing her boyfriend, Bala Haruna to death over his refusal to sponsor their daughter’s birthday party.

Peter was picked up by men of the Homicide Unit of the Lagos State Police Command in the Surulere area of the state where she and her lover cohabited.

The state Police Public Relations Officer, Bala Elkana, in a statement on Tuesday said that Haruna’s refusal to release money for the party led to a heated argument between the lovers, and that Stella, who was infuriated by Haruna’s, attacked him with a knife and stabbed him to death.

“On Tuesday, September 17, 2019, around 6am, homicide detectives from the Surulere Division arrested one Stella Peter, 23, for stabbing her hubby, Bala Haruna, 25, to death. The couple, who were not actually married, lived together at No. 2 Tejuosho Avenue, Surulere, Lagos, for three years and had a baby, who just turned one.

“An argument ensued between them, which turned violent, and the woman used a kitchen knife to stab the man in the back, which led to his death. The woman accused the man of refusing to release money for their daughter’s birthday party.

“Homicide detectives from the State Criminal Investigation and Intelligence Department, Yaba, have taken over the investigation. The suspect confessed to the crime. She will be charged for murder,” he said.

Elkana also disclosed that one Oseni Waheed and three yet-to-be identified members of his gang were arrested by detectives for terrorising residents of the Igando-Egan area of the state.

He said Waheed and his gang members had been on the wanted list of the command for their involvement in the murder of a policeman attached to the Amukoko Division during one of their robbery operations.

The suspects, he said were arrested on September 14.

The PPRO said, “On Saturday, September 14, 2019, around 1.30am, following sustained monitoring, a team of detectives led by the Divisional Police Officer, Igando, CSP Taiwo Kasumu, arrested three notorious armed robbery suspects. The gang has been terrorising the Igando/Egan residential neighbourhood, mostly at night.

“The men came to the neighbourhood on three motorcycles with intent to rob residents on the Ikotun-Igando Road, but the attempt was foiled by the police. One Oseni Waheed, 32, was arrested at the scene with one locally-made pistol, while the others escaped. Waheed led detectives to Aribisala Street in Egan, where three of his fleeing accomplices were arrested around 2.30am on Monday, September 16, 2019.

“The suspects were on the wanted list of the SCIID, Yaba, for a series of robberies and murders, including the murder of a policeman attached to the Amukoko Division during one of their operations. Investigation is ongoing and the suspects will be charged.”

The statement said also that personnel of the command arrested one Usman Adeyemi following the interception of the van, which he allegedly used in conveying 20 bags of Indian hemp.

“On Monday, September 16, 2019, around 2am, police officers from the Area ‘J’ Command, intercepted a van on Itafaji Street, Lagos Island, which was loaded with 20 bags of cannabis leaves. The driver of the van, Usman Adeyemi, 27, was arrested, while the vehicle was impounded for discreet investigation,” he stated.

In another development, the Police spokesman said men of the command, have two suspected criminals who allegedly stole a black Honda Accord 2007 car from a car wash in the Satellite Town area of the state.

“The suspects specialised in snatching vehicles from the owners or stealing them from where they were parked. They confessed that they stole the vehicle from a car wash in Satellite Town, Lagos. Investigation is ongoing and the suspects will be charged.”