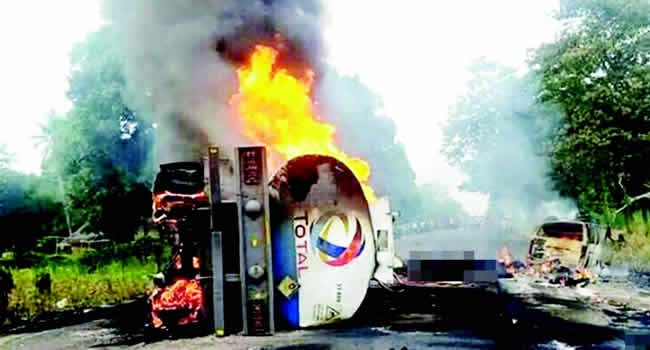 Benue State Government says all is set for mass burial on Wednesday, of victims of the tanker explosion at Ahumbe village, whose bodies have been burnt beyond recognition.

The Deputy Governor, Mr. Benson Abounu, disclosed this in Makurdi, in a chat with newsmen.

Abounu said the victims would be buried on Wednesday at the village where the incident occurred.

He, however, said families who had been able to identify their loved ones, would be allowed to take them for proper burial.

“As I am talking to you now the total number of deaths is 48, and we still have over 90 people who are receiving treatment across hospitals in the state.

“There were a good number of people who were burnt beyond recognition that even their relations, to pointedly say this is my relation, has become very difficult.

“Today we have decided that for people in this group, we are going to give them mass burial somewhere in Gwer Local Government, near Ahumbe, where the explosion took place.

“But any family that is able to recognise their loved ones can take them away and give them a benefiting burial.

“Unfortunately, the victims cut across ages, the youngest is about nine years old is in Aliade hospital, there is also an 11 year old too at FMC Makurdi,’’ the deputy governor explained.

He described the explosion as “shocking” saying the survivors suffered between 30 to 90 per cent degrees burns.

Abounu disclosed that the occupants of the Toyota bus, which silencer ignited the fire on the tar and resulted in the explosion, were coming from Cross River State, where they went for burial of a relative.

He equally commended the various hospitals rendering medical services to the victims, noting that they commenced treatment of victims without demanding for money.

He specifically commended the two fire service officials who sustained injuries while trying to assist victims at the scene of the explosion saying their services would not be in vain.

Abouno said one of the fire officials was in intensive care unit while the other, who suffered 30 degree burns, was being treated.