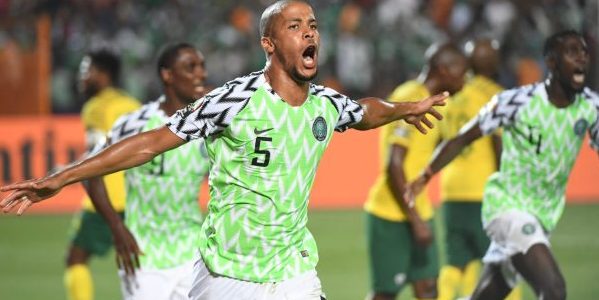 The Super Eagles of Nigeria have qualified for the semi final stage of the ongoing Africa Cup of Nations (AFCON) in Egypt with a 2-1 victory against South Africa.

In the first half, Super Eagles winger, Samuel Chukwueze put Nigeria in the lead after scoring in 27th minute.

In the second half, South Africa’s player, Bongani Zungu scored a dramatic header after South Africa won a free kick.

The goal was contested as the Nigerian side considered it an off-side goal.

However, the referee after consulting with the VAR allowed the goal.

South Africa’s equalizer made both teams fiercer and aggressive in a contest for the winning goal.

Luck smiled on the Super Eagles and Troost Ekong scored the winning goal of the match in the 89th minute from a corner kick played by Moses Simon.

Nigeria will slug it out with either Cote d’ivoire or Algeria in the semi-finals.