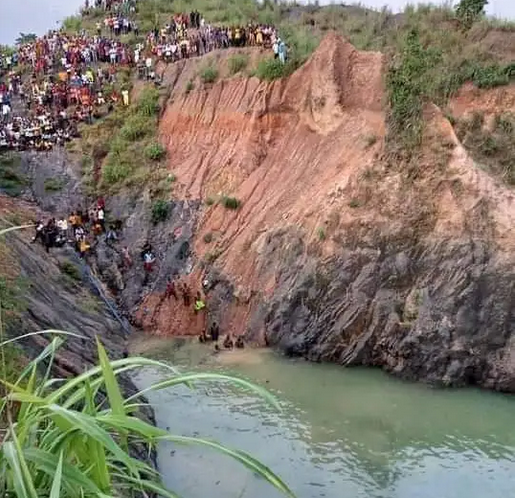 An unidentified vehicle on Saturday plunged into a mining pit at Enyigba community in Abakaliki Local Government Area of Ebonyi, the police command in the state confirms.

DSP Loveth Odah, the command’s Public Relations Officer told the News Agency of Nigeria (NAN) in an interview that it responded swiftly to the distress call received over the incident.

Odah said that local divers were immediately contacted to rescue occupants of the vehicle but they could not succeed due to poor visibility as the incident happened in the night.

“Available reports suspected that the driver lost control of the vehicle and fell into an unclaimed mining pit which was water-logged due to constant rainfall.

“We will continue with the rescue efforts on Sunday and will hopefully access more equipment,” she said.

She said that the number of passengers inside the vehicle was still not ascertained as the relevant state government agencies had been contacted.

Mr.Anthony Okore, the Sector Commander of Federal Road Safety Corps in Ebonyi also confirmed the incident to NAN and noted that its personnel were also deployed to the scene of the incident.

“We contacted the relevant government agencies to assist us with a crane in rescuing the victims but the rescue process will continue on Sunday.

“The type of vehicle and the number of passengers involved still remain unverified,” he said.

Chief Stanley Okoro-Emegha, the state Commissioner for Internal Security told NAN that efforts had been intensified to rescue the trapped victims.

“We have arranged for a crane to continue with the rescue process because the one being used by the state ministry of works had a minor fault.

“We have ordered that it should be repaired immediately as the incident was sudden and unfortunate,” he said.

He expressed surprise over the suspected loss of control by the vehicle’s driver which led to the plunge considering the protective pillars which barricaded the pit.

An eye witness who spoke under the condition of anonymity claimed he was driving behind the vehicle when it suddenly veered from the road and plunged into the pit.

NAN recalls that over 20 persons died in September 2020 when a bus they were travelling on plunged into the Akaeze river in Ivo LGA of the state. (NAN)