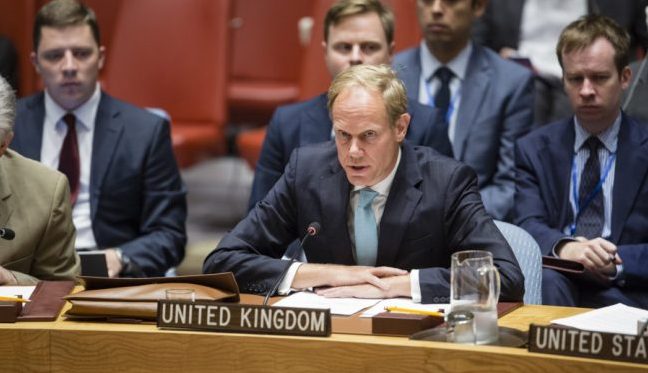 The United Kingdom government has reiterated its support to Nigeria and neighbouring countries to defeat the destructive Boko Haram terrorists in the Northeast and the Lake Chad Basin region.
The country’s Permanent Representative to the UN, Matthew Rycroft, made the pledge in his statement on Wednesday at the Security Council briefing on the Lake Chad Basin.
Rycroft said it was clear that the Security Council members should all redouble their efforts to implement the commitments that they made in resolution 2349 against Boko Haram.
“The UK will play our part. We remain committed to partnering with Nigeria and its neighbours to degrade and defeat Boko Haram.
“We remain committed to helping people in need in the region, having scaled up our humanitarian support to 130 million dollars this year.
“We also announced an additional 260 million over four years, as part of the North East Nigeria Transition to Development programme.
“But we all need to play our part in the Nigeria Humanitarian Fund launched in February with an appeal for one billion dollars this year.
“As of last month that appeal is less than half funded. As the Secretary-General’s report makes clear, insufficient funding from the donor community continues to limit the provision of food aid, development and recovery activities.
“And just as the international community must act, so too should governments in the region.
“We look to the Government of Nigeria and affected countries to provide greater resources where they can and to further prioritise the humanitarian response.
“We also call on them to expedite all remaining registrations for humanitarian organisations in the region, as the Secretary-General’s report notes.
“We welcome the increased civil-military coordination in the humanitarian effort and urge this to continue,” he said.
Rycroft, however, regretted that six months on from the visit of Security Council Fact Finding Mission to the Lake Chad Basin, the situation remained deeply troubling.
“Yes, Boko Haram has been degraded, yes territory has been reclaimed, but Boko Haram is far from a spent force. They are down but not out, shifting their tactics from land grabs to opportunistic attacks.
“Maiduguri now faces weekly suicide attacks, many from girls forced to be suicide bombers. Over 400 people have been killed since we visited.
“Boko Haram’s shameful, sickening abductions of young women and girls continues unabated.
“Those that return continue to face stigma and discrimination, which is why the UK will host a ministerial event here on the 18th of September to launch a new set of global principles to tackle such stigma.
“The continuing barbarity is only exacerbating the humanitarian crises. Since we visited, the number of Nigerians seeking refuge in neighbouring countries has only marginally decreased.
“Nearly two million people are still displaced in North East Nigeria and over eight million in need of urgent, life-saving assistance.
“And while the numbers of forced returns have fallen, we have seen thousands of people pressured back into areas where they don’t feel safe,” the UK envoy said.
According to him, it was clear that a long term solution would only be found through addressing the root causes which led to Boko Haram’s emergence.
“That, I think, was the main lesson for many of us on our visit. That search for the longer term root causes requires a regional plan to address the political, economic, governance, transparency and accountability issues.
“So we support calls for greater funding to strengthen the UN’s monitoring presence on the ground.
“In short, Mr. President, there is a lot more that all of us need to do. Six months on from our visit, we cannot afford to lose focus,” he said. (NAN)