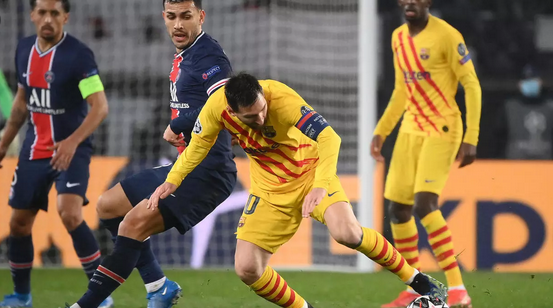 Paris Saint-Germain survived an upset-minded FC Barcelona to reach the Champions League quarterfinals, 5-2 on aggregate, after a 1-1 draw in their second leg in Paris on Wednesday.

FC Barcelona, looking to repeat their famous resurgence against PSG in March 2017, dominated play in the first half but it was the hosts who struck first through Kylian Mbappe.

This was after he was awarded a penalty for going down under minimal contact near the half-hour mark, with the France international calmly converting from eight yards.

The goal made Mbappe the youngest player ever to reach 25 goals in the Champions League (22 years and 80 days).

Lionel Messi struck back with a spectacular goal seven minutes later when he picked up a pass near midfield, took a couple touches and unleashed a thunderous strike past a helpless Keylor Navas from 30 yards out.

The goal was his 14th UCL goal from outside the area since 2010-11, which is tied with Cristiano Ronaldo for the most in that span.

The goal also snapped a five-game scoreless streak in road UCL knockout matches, and was his first such goal since Feb. 20, 2018 when he scored at Chelsea.

Messi had to chance to pile more pressure on PSG before the break after Antoine Griezmann won a penalty in stoppage time.

But Navas guessed correctly and pushed the Argentine’s attempt onto the crossbar to keep the match even at half-time.

FC Barcelona continued to give PSG fits in the second half, attacking in waves and constantly pulling defenders out of position.

But they could not find the touches needed to convert their many chances into goals and suffered their first round-of-16 exit since the 2006-2007 campaign.

The draw for the quarterfinals will take place on March 19. (Reuters/NAN)