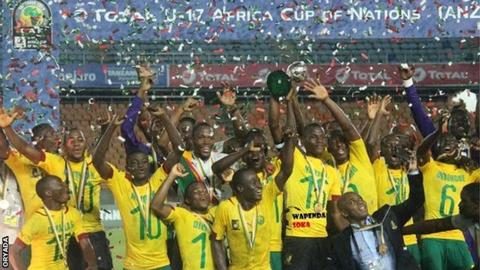 Cameroon’s national under-17 male football team on Sunday beat their Guinean counterparts 5-3 after penalty kicks to win the 2019 Africa Under-17 Nations Cup competition.

In the final match played at the Benjamin Mkapa National Stadium in Dar es Salaam, Tanzania both sides drew goalless after 90 minutes of intense action.

Both sides failed to score any goal for the game to go on to penalty kicks directly.

They scored their first five kicks each for an advance into the sudden death shots.

It continued as a ding-dong affair, with both sides scoring, until Guinea’s Mohamed Youssouf Sacko missed the fourth kick.

The News Agency of Nigeria, NAN, reports that the result means Cameroon takes the AFCON U17 Cup, while Guinea finished second.

Third place has gone to Angola who on Saturday beat Nigeria 2-1 at the same venue in the third-place match.

All four teams have advanced to the 2019 FIFA U17 World Cup billed for later in the year in Brazil.