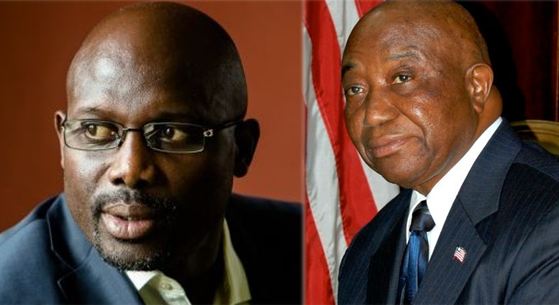 The U.S. government, through its embassy in Monrovia, has warned of possible violence before or after Tuesday’s presidential run-off elections in Liberia.

In a statement on Sunday, the embassy warned American citizens resident in or travelling to Liberia that criminal elements could take advantage of a large political or social gathering to attack participants or others nearby.

“Event intended to be peaceful can turn confrontational and escalate into violence.

“You should avoid areas of demonstrations and protests and exercise caution if in the vicinity of any large gatherings.

It also advised them to stay in touch with their family members and ensure they knew how to reach them in the event of an emergency.

According to the embassy, those concerned should expect restrictions on traffic circulation, either imposed by the authorities or caused by political rallies.

The run-off is between former world footballer of the year, George Weah, of the opposition Coalition for Democratic Change (CDC) and incumbent Vice President, Joseph Boakai, of the ruling Unity Party (UP).

Both men are battling to succeed outgoing President Ellen Johnson-Sirleaf, whose constitutional two terms in office end in January.

Weah led 21 other presidential candidates in the first round with 38 per cent of the total votes cast, while Boakai came second with 29 per cent.

They both fell short of the 50 per cent plus one vote stipulated by the Constitution for a winner to emerge in the first round.

The News Agency of Nigeria (NAN) reports that the first round of the presidential and House of Representatives elections held on October 10 were generally peaceful and adjudged free and fair by local and international observers.

However, third-place finisher in the first round, Mr Charles Brumskine of the Liberty Party (LP), filed a petition against the exercise on alleged irregularities and massive fraud.

The case, which ended at the Supreme Court with the dismissal of Brumskine’s petition for want of evidence, delayed the run-off earlier slated for November 7.

Meanwhile, Weah rounded off his run-off campaign on Saturday with the promise of a “new beginning” in Liberia if elected president, according to local media.

Addressing a mammoth crowd at the CDC’s final rally held at the Samuel K. Doe Sports Complex on the outskirt of Monrovia, he said Tuesday’s polls was an opportunity for Liberians to change their lives by voting for him.