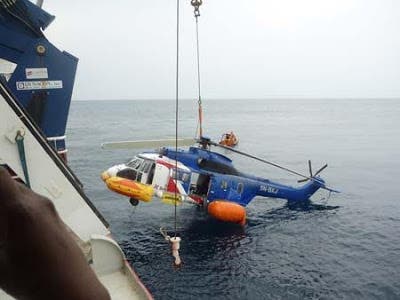 Two bodies have been extracted from a private helicopter that crashed into the Tiber River near Rome, the National Fire Corps said on Twitter on Saturday.

The helicopter crashed into the river on Friday afternoon near the Nazzano Tevere-Farfa Natural Reserve, which is in Rome province, in the countryside north of the Italian capital.

“Divers have recovered the lifeless bodies of two people from the helicopter that crashed yesterday into the Tiber,’’ firefighters tweeted on Saturday.

According to La Repubblica and Il Messaggero newspapers, the victims are the pilot, a retired Alitalia pilot in his 70s, and the passenger, an elderly woman.

They were found inside the helicopter at a depth of six meters underwater, still strapped in their seats.

Witnesses told the Police the helicopter touched high-tension wires from a nearby railway line before sinking into the river, the papers said.

The helicopter reportedly belonged to the pilot, who kept it on a helipad on his property in the countryside north of Rome and liked to take friends flying with him, according to the newspapers.

On May 25, a two-seater plane from a flight school in northern Rome crashed into the Tiber River, killing a flight student, while the flight instructor survived. (Xinhua/NAN)