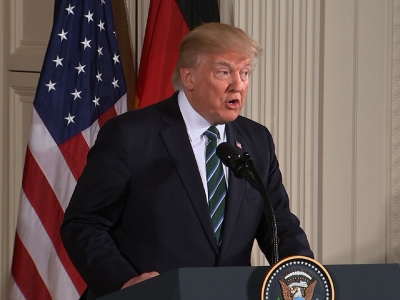 President Donald Trump tried to counter one-two blows of betrayal and scandalThursday, punching back at a bare-knuckle book that portrayed his White House as a fetid stew of backbiting, incompetence and dysfunction.

Trump’s lawyers moved to prevent the release of “Fire and Fury: Inside the Trump White House” — an exposé by author and political muck spreader Michael Wolff — which quotes key Trump aides raising questions about his fitness for office.

The book — which paints Trump as craven, unstable and far out of his depth in the Oval Office — extensively quotes his former ally and chief strategist Steve Bannon, who also received a “cease and desist” order from Trump’s attorneys.

“Your publication of the false/baseless statements about Mr. Trump gives rise to, among other claims, defamation by libel, defamation by libel per se, false light invasion of privacy, tortuous interference with contractual relations, and inducement of breach of contract,” Trump’s lawyers said in the letter to Wolff.

In the book, Bannon is quoted as accusing Trump’s eldest son Don Jr of “treasonous” contacts with a Kremlin-linked lawyer, and saying the president’s daughter Ivanka is “dumb as a brick.”

But it is the US president himself that is cast in the most unfavourable light — by a series of his top aides.

The book claims that for “Steve Mnuchin and Reince Priebus, the president was an ‘idiot.’ For Gary Cohn, he was ‘dumb as shit.’ For H.R. McMaster, he was a ‘dope.’ The list went on.”

Trump appears to have been most upset by the betrayal of Bannon — the man who engineered the New York real estate mogul’s link to the nationalist far right and helped create a pro-Trump media ecosystem.

“He called me a great man last night. He obviously changed his tune pretty quick,” Trump said in the Roosevelt Room Thursday. “I don’t talk to him.”

A day earlier, Trump unleashed a spectacular denunciation of Bannon, describing him as insane and irrelevant.

“Steve Bannon has nothing to do with me or my presidency. When he was fired, he not only lost his job, he lost his mind,” Trump said in a written statement.

Bannon, who left the White House in August, is also quoted in the book as saying that the investigation by special counsel Robert Mueller into Russian interference in the 2016 election will focus on money laundering.

The investigation by Mueller, a former FBI director, is looking into whether the Trump campaign colluded with Russia to help get him elected — a charge the president has repeatedly and vehemently denied. 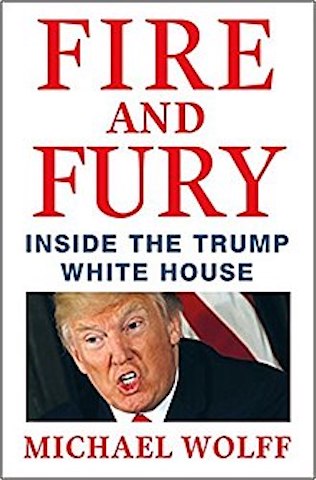 “The three senior guys in the campaign thought it was a good idea to meet with a foreign government inside Trump Tower in the conference room on the 25th floor — with no lawyers,” Bannon was quoted as saying in the book.

“They didn’t have any lawyers.

“Even if you thought that this was not treasonous, or unpatriotic, or bad shit, and I happen to think it’s all of that, you should have called the FBI immediately,” he said.

Wolff’s book — which he says is based on interviews with Trump, his senior aides and others — also mentions that Trump eats food from McDonald’s because he believes it to be safe from poison, and that his team did not believe he was capable of winning the election.

“Shortly after 8 p.m. on Election Night, when the unexpected trend — Trump might actually win — seemed confirmed, Don Jr. told a friend that his father, or DJT, as he calls him, looked as if he had seen a ghost. Melania was in tears — and not of joy,” it said.

According to reports, the controversial book, to be released January 9, moved 48,448 positions up on Amazon’s best-seller list to reach the number one spot.