The Presidential Election Petition Tribunal on Wednesday struck out portions of the PDP’s petition alleging criminal acts against some security personnel during the Feb. 23.

It agreed with the INEC that it was wrong of the petitioners to raise criminal allegations of intimidation, harassment, corruption, among others against security personnel and some named persons who are not parties to the petition.

INEC had filed a motion that the court lacked the vires (powers) to entertain any criminal allegations against any person, who is not before it.

Some other motion dismissed by the tribunal include: INEC’s motion challenging competence of petitioners’ counsel and INEC’S prayer to strike out some paragraphs in the petition. 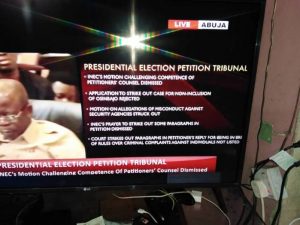