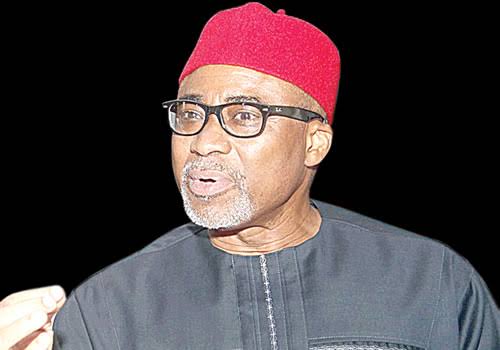 The National and State Houses of Assembly Election Petition Tribunal sitting in Umuahia on Wednesday dismissed the petition against the Senate Minority Leader, Enyinnaya Abaribe, challenging his re-election as senator for Abia South.

The All Progressive Grand Alliance, APGA, and its candidate, Mr. Chris Nkwonta, had approached the court to nullify the declaration of Abaribe of the Peoples Democratic Party, PDP, as winner of the Feb. 23 poll on the ground that it was marred with irregularities.

The News Agency of Nigeria, NAN, reports that Nkwonta claimed to have won the majority of the lawful votes cast.

He urged the tribunal to declare him winner or order a rerun in some polling units over allegations of invalid accreditation and over-voting.

Delivering the judgement, a member of the three member panel, Justice Wasiu Animashaun faulted the decision of the petitioners to rely on card reader accreditation.

He noted that the machine could not take the place of the voters’ register as it was only complementary.

The panel held that if the number of votes from over-voting claimed by the petitioners was removed from the figure with which Abaribe was declared winner, he would still maintain a reasonable margin of lead over the petitioners.

Dismissing the petition for lack of merit, the tribunal held that the petitioners failed to prove their allegation of irregularities.

It awarded N500, 000 cost against the petitioners in favour of the second (Abaribe) and third, PDP , respondents.

Reacting to the judgement, counsel for Abaribe, Mr. Uche Ihemamba, expressed happiness, saying that the judgement was in tandem with the current positions of the law.

Mr. Liborous Oshoma, counsel for the Independent National Electoral Commission (INEC) said that they expected the decision of the tribunal after reviewing the petition, knowing that it had no merit in it.

But Mr. Betrang Fawuti, counsel for the Nkwonta said they would review the judgement and file an appeal.